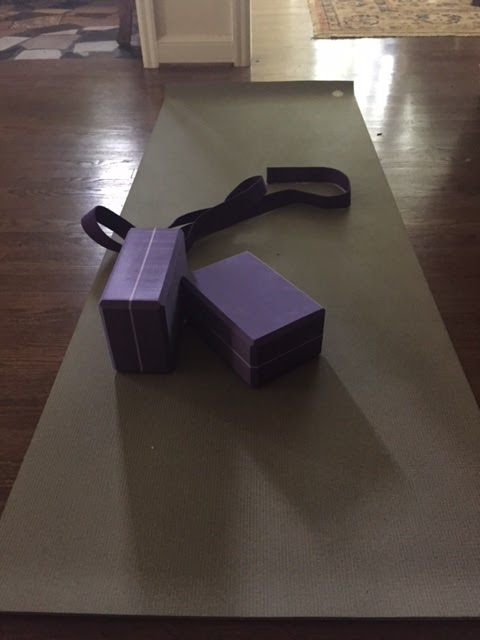 My tendency in life with things I become passionate about, is to dive in head first then sort myself out on the details later,  often with  hopes of both wings AND a prayer to sort me out if need be.  It’s not the best way to do things, but seems to be the way I naturally lean.  Yoga was an exception to that and  I have no idea why, but I dipped myself into the experience very slowly, and with caution when I began some 20 years ago.   I loved how it made me feel post practice (at the time I was doing Bikram’s 26 poses in a heated room, which I gave up several years ago) but still only had a toe in as I wasn’t quite ready to fully commit.  It was like getting a full body massage but with my coat still on.   As time passed, I’d teeter between serious and shoot, I forgot to do yoga this week, which would roll into forgetting to do it this month and then I really wasn’t doing yoga at all and where was that darn mat anyway?  I was skeptical.  I was not hooked.  I was sampling the goods but not willing to go deep enough to remove my metaphorical coat.  I’m not sure exactly when I made the shift, but shift it did and I began to crave more and more of the goodness I was getting out of the practice.  I took my coat off.  I went deep.  I felt it not only in my body, but in my soul as well, which was another thing – body and soul had now become a team and were working well together.

When I first started yoga, l was focused on its physicality and how it was going to benefit my body in a jeans fitting better kind of way.  As I became more dedicated to the practice,  the inseams no longer rubbing when I walked paled when compared to what was really happening in my body.  I had crossed a line.  I had gone deeper.  Yoga seemed to be giving me exactly what I needed and with impeccable timing.  My kids commented on my peaceful nature and was I never going to lose my temper again??   It was as if I had been handed the road map to myself.  Or better yet, I had been handed the ability to read the road map that has been in my possession all along.  My strong flexibility and weak balance in the poses mimicked my own life during those early yoga years,  giving me insight into the areas that needed more focus and healing.  My mat had became the mirror to my life. THIS… this unrolling of my mat several times a week and moving with my breath, was what kept me upright during a time when I was constantly fighting falling into an emotional heap because it felt far more natural.  I’m no longer that person but do remember her and hold her in my heart and am continually grateful for those early lessons on my mat, namely the ones that after holding a difficult posture seemed to whisper to me that I was going to be OK because I was strong and getting stronger.

Fast forward 15 years and I decided to go deeper into my yoga practice,  and signed up for Max Strom’s yoga teacher training, held in 3 modules, 9 days each.  I just finished the 2nd module and although exhausted, I’m trying to hold onto the post-glow as long as I can, while trying to absorb and make sense of everything I just learned. Besides a lot of posture perfecting, and anatomy that extended far beyond my rudimentary knowledge of… well “the knee bone connecting to the thigh bone” song comes to mind,  I came away with a much deeper understanding of exactly who this person is that I carry around with me every day, both on and off the mat, hyper-extended joints and all.

Yoga has become my nudge to slow down, go deeper, stop and simply be, not because someone is telling me to do that, but because it simply feels better to live life that way.   I still day dream in class and more than once have come out of a thought only to find myself a few postures behind the class and oh well.  Perfection is not the goal – a thought that was reinforced when an almond fell out of my top during a down dog recently.   Reality.  I recently started following a Facebook page called “Yoga for Humans” that demystifies the practice with humor and real life stuff and reminds us of who we are…human… humans doing yoga to become better humans.  I’m a proud human doing yoga who has food drop out of her shirt, daydreams during poses, and will no doubt continue to make a fool of herself while trying to unravel out of a posture that she never should have tried in the first place.  A human doing yoga, mistakes and mishaps included  (thanks, Amy Rader, it’s brilliant).

I’d like to say that I unroll my mat every morning and do sun salutations to greet the dawn of a new day, but I don’t.  I cobble together some postures that feel right and if one or two postures hit the mark and feels like enough, then so be it.  My at home yoga always looks better in its pre-practice presentation in my mind than what actually transpires in real life.  I watched a video several months  ago that showed an accomplished yogi’s morning practice, beginning with her putting the kettle on for morning tea then proceeding to go through a lovely, while at the same time very strong practice until the kettle whistled.  She then leaves her mat and paces to the kitchen to pour the tea with such grace and elegance that it seems like a posture in its own right. That’s where my mind goes when I think about a morning practice, but instead I will spot a missing sock under the couch during a forward bend, which has to immediately be retrieved and as I make my way back to the mat, I notice a painting that is crooked.   I once rearranged my entire living room during my “yoga practice,”  which probably says more about my focus than anything else and my need to go to a class where I find my community and my focus.  The other thing that yoga has taught me is to listen to what I need at the moment, like right now for instance.  I’m in my yoga clothes, have a filled water bottle and my rolled up mat next to my feet and had every intention of going to class until an hour ago when sitting down and writing about yoga seemed more important than actually doing it.  Creativity is fleeting and often will out run me so I have to seize the opportunity when it arises.  I’m discovering the art of awareness and listening without judgment and those two combined will take me far, even if right now my far is not inching from my couch with a laptop perched on my strong, but getting stronger quads, while typing about yoga.

I’ve got 4 months until I head back to the final training module and will regroup with 24 other students under the guidance of the extraordinary teacher, Max Strom.   The people I’ve met have become one of the greatest gifts to me during this process and it has been an honor to surround myself with such gracious, open and truly lovely people, all sharing the common thread of a passion for yoga. I feel like I’m standing just a tiny bit taller and with a whole lot more joy because of them.   Until then, I will stumble my way in and out of postures, will daydream my way right off of my mat and onto mountaintops and Italian villages and will sit and type instead of going to class because I’m   learning to listen and act accordingly….one posture at a time.