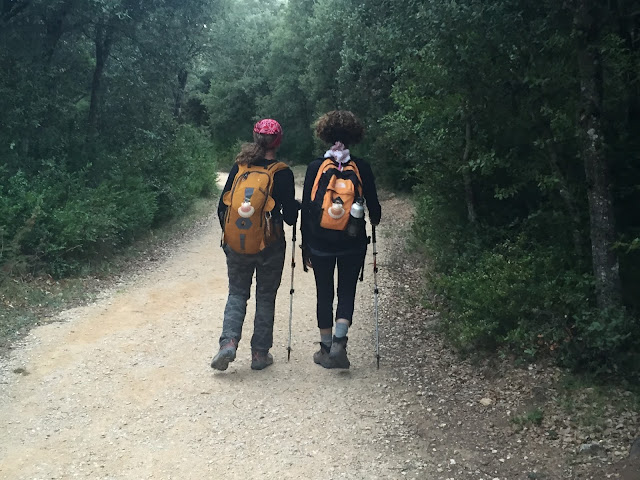 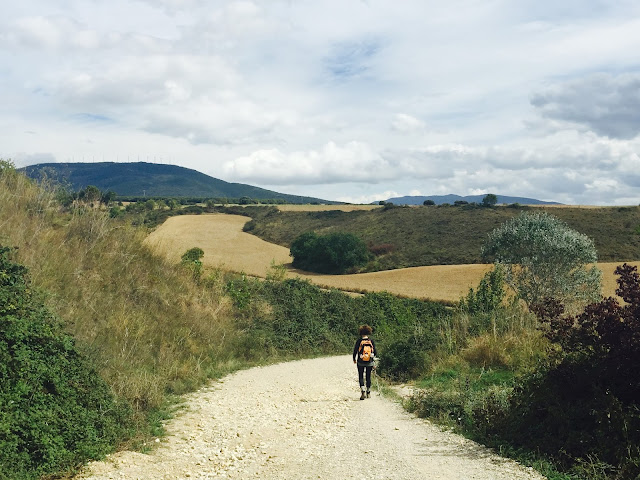 So… the Camino.  Susan and I logged 120 plus miles on it, which no matter how we seemed to slice it and regardless of the daily mileage, consistently added up to 8 hours of walking a day, or more accurately,  hiking. Many have asked me since my return home how it was and once I’ve made my way through the blister talk, the amazing people, the beautiful scenery and charming towns we experienced and oh yea, it was a life changer, I’m kind of at a loss for words.

And that’s where I hesitate because I’m really not sure I’ve got an answer…yet…but I know that pacing through those miles, with Susan nearby, but not necessarily in talking distance, the time spent alone with presence and awareness definitely had an impact on me.  It was like weaving in and out of an 8 hour walking meditation that went on for 9 days.

Although the goal for most is the cathedral in Santiago, this is far more about the journey than the destination, as it is in the journey where the magic happens.  I witnessed this over and over again with the kindness among people who didn’t know one another, yet we all shared something or we wouldn’t have found ourselves on the Camino in the first place. There was the case of the Brazilians who had found Dan from Boston’s itinerary book and were so concerned about finding him to return it.  This was a story we heard not only from the Brazilians, but from the Canadians, the Hawaiians as well as the two brothers from Indiana.  What really made this amazing was that we were not all bunched together, constantly running into one another, but rather there were 14 to 16 miles covered a day, each of us with different start times and with different paces,  so you didn’t see the same people over and over again,  and some people, Dan from Boston for instance, we only saw the first day.  There was an intimacy present that I never expected.   We heard concern about David from Toronto as he hadn’t been seen for a couple of days and then there was Dr. Dan from Hawaii who was tending to a girl in his group who had come down with pneumonia.   We were very concerned for her after seeing her trudging slowly along, while wearing a surgical mask. Susan and I also were worried about Maria from California,  who we met the day before we began walking and who had had a string of bad luck before she even got to St. Jean Pied de Port, where we began.  She shared her woes with us over a glass of wine the night before our Camino start, which among a lot of getting lost stories,  included a flare up of tendinitis in her knee.  She was very discouraged and said her kids were telling her enough.  Come home.  I don’t think a day went by that Maria didn’t come up in our conversations, wondering how she was and if she was even on the Camino at all.  After the difficult journey on day one, on day two we saw the negative effects of that long and tedious climb on more than one pilgrim in the form of a knee brace.  Where were those pilgrims?  Were they still on the Camino?  Then there was the minor fall Susan had on a rocky downhill stretch 3 days in and the British man who came up to her in the café where we were having tapas in Pamplona and asked her if she was the woman who fell earlier in the day and was she OK?  (She was OK, by the way…).

This was what Eduardo from Brazil was talking about when he said that we are all in this together, yet we are all doing the Camino alone.  It was that invisible bond that united us all that really touched me.  No one asked or even seemed to care what you did in your “other life” and where you lived wasn’t always the first question either.  Rather, the focus was more about the here, the now, the next town, the Camino. 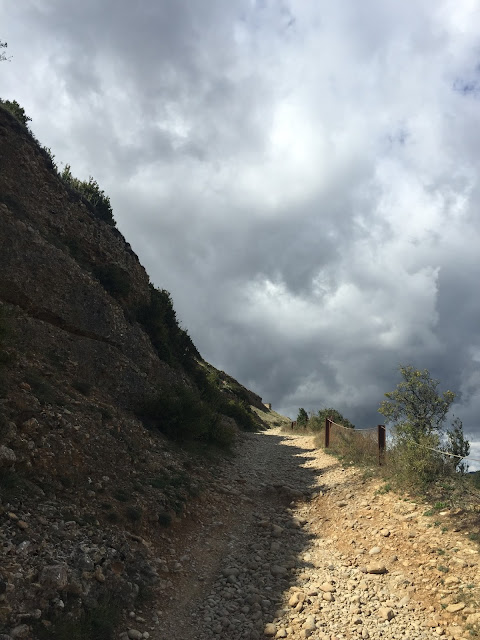 Our climb through the Pyrenees on day one, pushed me to my edge, which I found out extended a lot farther out than I realized.  It was our longest and most difficult day, challenging both my physical and my mental limits.  I thought I was at my limit, when we got to the hotel, only to find out that there was no elevator and we were on the 3rd floor, which in Spain means 4 flights up.  And we did it, with reserve tank fuel and our gear in tow.  I learned that there was a whole lot more in that reserve tank than I ever give myself credit for. That was a good piece of knowledge to tuck away in my pack for the many miles ahead.

Walking the Camino offered the opportunity to strip away all outside distraction from life  and break things down to the very simplest components of putting one foot in front of another, mile after mile, day after day. I learned to focus on what was in front of me, especially when it came to the big hills as the view towards the end was daunting,  but when you can bring it back to what’s right in front of you, one boot in front of another, with an occasional eye to the prize, it sure is a lot easier.  It didn’t take long to see the parallels to life that the Camino offered up to us daily.

There are many faces and a lot of stories that come to mind when reflecting back on the Camino, one that was especially touching… the person, not the story, as the story is one that Susan and I made up.  When we were leaving Pamplona, we saw a girl who I’m guessing was in her mid to late 20’s.  She was walking at a slow pace with her head held low and I can’t remember if I told her “Buen Camino” when we passed or not, but I do remember anticipating that she likely wouldn’t answer if I did say it to her.  She seemed to be in her own world, far away from any of us who passed.  She was wearing boots and had a pair of boots tied onto her pack.  Seeing boots hanging from packs was common in the first few days as people had switched to sandals due to blisters (sandals on the Camino, I might add, seemed a whole lot harder to me than walking with the blistered feet in boots, but to each his own.  I even saw one guy barefoot, no boots hanging because I’m guessing he started barefoot.  Again, to each his own).  This situation was different from what we were used to seeing,  as she was wearing and toting boots.  The boots hanging from the pack looked to be a bit larger than the boots she was wearing, but still a woman’s boot.  We later passed her again, still with a solemn,  head down gait, and couldn’t help but notice that her pack had pushed down her pants on one side, exposing her underwear.  There was something very vulnerable about her, especially now that the side of her underwear was showing and she either knew and simply didn’t care, or didn’t realize it.  Susan and I were quite take by her and spontaneously started forming her story.   She had planned to do the Camino with someone (Her Mom?  Her Aunt?  Her sister?), but that person died a few months before they were to start the Camino, so she carried the boots in memory.  I have no idea whatsoever if this is true or not.  Maybe she couldn’t decide which pair of boots to bring, so she brought them both,  and was not sad, but tired.  Her downward gaze and posture told the story.  We just filled in some blanks.   Happily, the story, made up or not, had a happy ending as we saw our sad girl in Los Arcos, all smiles and with a guy.  We put that story to rest, only to move on to the very overweight French man who we quietly started calling “Slim” as I swear, he was shrinking in front of our very eyes.  Day by day.  I might add that there is tedium in the long, 14 or 15 miles of walking days… stories, made up names, stories to go with the names and so on… it happens.  Or at least with us it did. 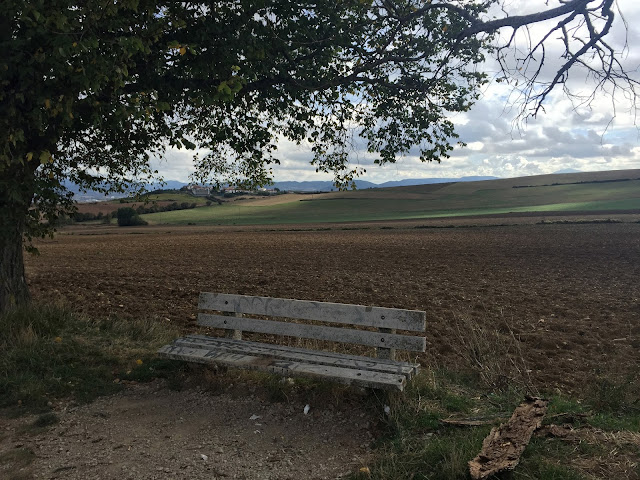 It took me 2 days of looking at my pack and duffle bag at the back door, exactly where I dropped them when I got home, before I could bring myself to open them up and begin the process of unpacking.  Given the well worn clothes, that had only had a couple of well-meaning, but kind of worthless,  sink washings, this wasn’t a great idea, so I entered the process with caution and a bit of trepidation. There was something in me that needed to keep that part of my journey front and center, before emptying them and tucking them away in a closet.  I wanted to hold onto all that I could fearing that it would be gone before I was really ready.  What I didn’t realize was that although I do miss being on the Camino, the Camino has not left me.  It popped up unexpectedly in a yoga class yesterday.  We started the class seated back to back with a partner.  I don’t usually care for “partner” yoga, especially when you don’t know your partner, but found the exercise quite interesting.  We both found our place of comfort between leaning and supporting and before long even our breath became in sync.  At the end of the class, we were seated in the same manner, but without the partner and our teacher told us to envision a person in our life who we knew “had our back” seated back to back with us, exactly as we had done in the beginning of class, but now with only the vision of a person behind us.  That’s when quite by surprise,  the tears started streaming down my face. I thought about  Susan and how she had my back, and me hers, during our incredible journey on the Camino.  These are the moments that I have no doubt that those who I met on the Camino will also have and I hope they will be in a place where they’ll have the luxury that I did in my yoga class to wrap themselves up in those feelings and honor them for what they are… the Camino’s nudge to us to stay on it, even though  our boots are off and physically we are thousands of miles away from those long, winding pathways.

This journey, my journey, as a pilgrim on the Camino,  was inspiring, challenging, moving, heartfelt and for me right now, unfinished. 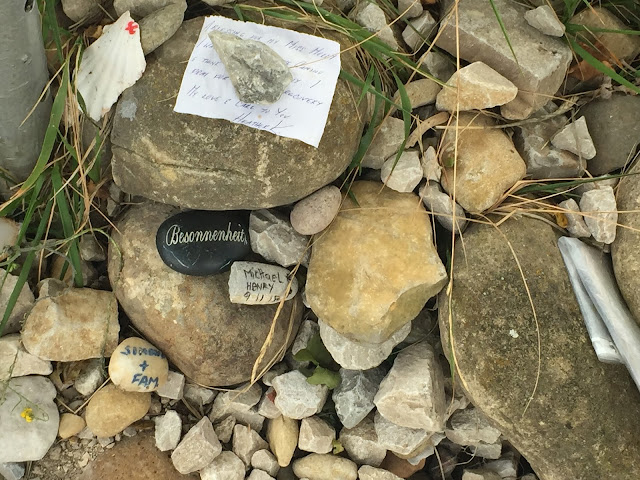 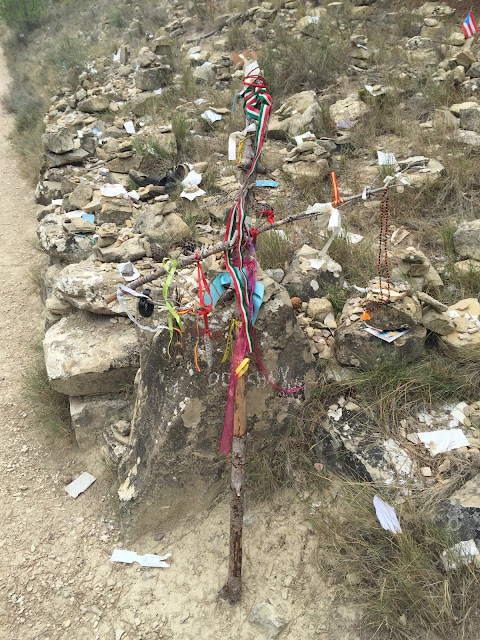 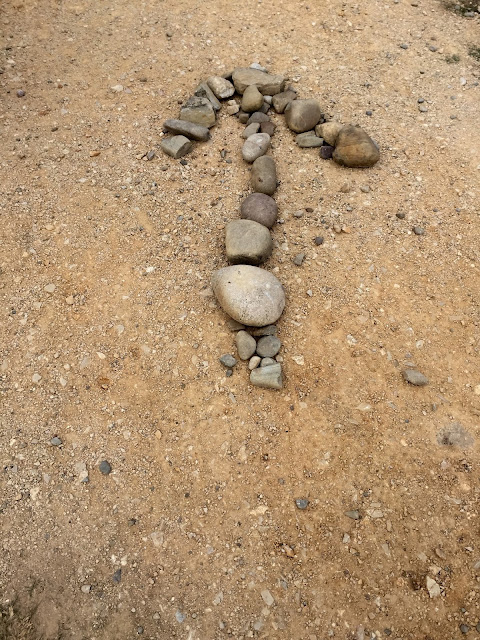 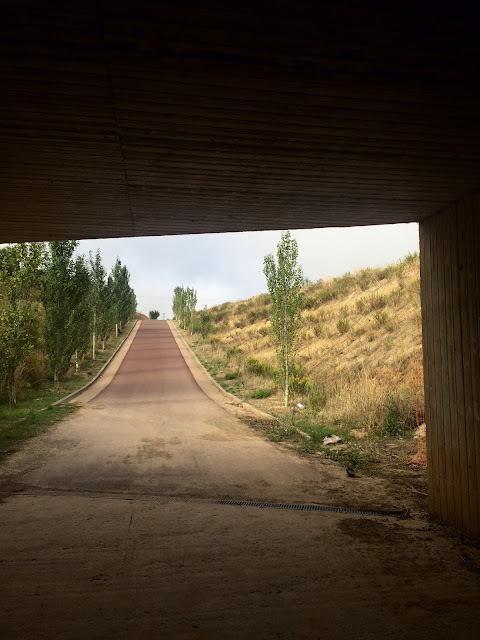