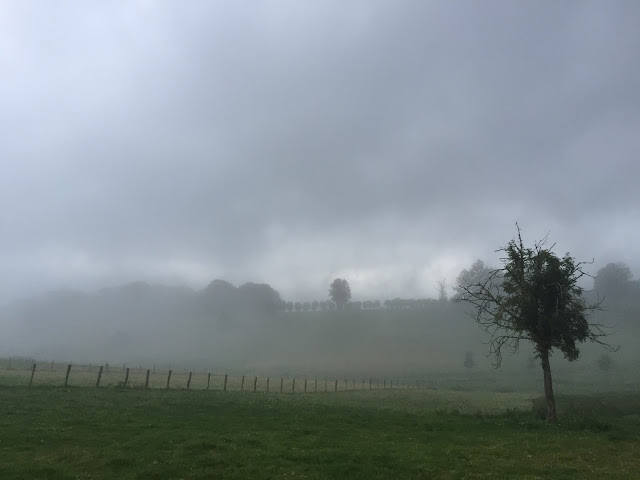 It was easy, and pretty natural, to go into today with a bit of dread.  It was pouring with rain, after all, and we had 14 miles ahead of us.  Thank goodness for ponchos.  It rained and rained and at times the rain was accompanied by thunder and lightening, which had us both wondering about the lightening rod hiking poles we were carrying, but all was not lost, or ruined or even all that miserable.  It was what it was and gave us a whole lot more appreciation for the sun that did eventually come out.

Wanting to escape the rain, we pulled into a small pub/restaurant called “Bar Juan” and enjoyed a nice 20 minute or so omelet “lunch” (it was not even noon, so I’m sure they would still be calling it breakfast).  By the time we had finished, the tiny one-roomed bar had at least 20 people waiting in line for the one waitress behind the counter and there were probably at least that many outside waiting to get in.  Our timing was perfect.  Had it been sunny, I doubt we would have allowed ourselves the luxury of enjoying lunch and a coffee afterwards before getting back on the Camino.

The lunch was so filling that after a couple of beers, neither one of us were all that hungry for dinner so ate “out of our packs.”  Susan loves to cook and was feeling the need so I gave her complete access to my snack stash and we enjoyed a lovely light dinner of beef jerky, Spanish almonds, an orange and some crackers we bought our first day in France… all laid out on a scarf (one that hadn’t touched a sweaty neck, yet…) and placed on the end of one of the beds in our room.  Simple.  I might add that although we’re only into day 2 on the Camino, our standards of hygiene and otherwise have slipped and we’ve gotten pretty casual, which I don’t mind one bit.

While nearing the end of our journey today, we passed what looked like a food truck on the side walk.  Several plastic tables had been placed in front of it and were filled with pilgrims enjoying an cup of cafe con leche or even a beer before heading out for the final few miles.  Only in Europe, I thought, would a “food truck” serve cafe con leche in a cup with a saucer.  I loved that there was no need for “to go” cups and that the ritual of sitting down for a proper cup of coffee, served in a cup with a saucer was that important.  It was a nice nudge to slow down.

We’re running into a lot of the same people, whether at dinner at night, or over a beer and there’s a real comfort to that. The common expression on the Camino is “Buen Camino,” regardless if Spanish your native language or not.  It is a real uniting factor for a group of people that speak so many different languages and come from so many different places.  It feels a bit like a hug, and doesn’t seem to lose any power even though it is said and received so many times a day.