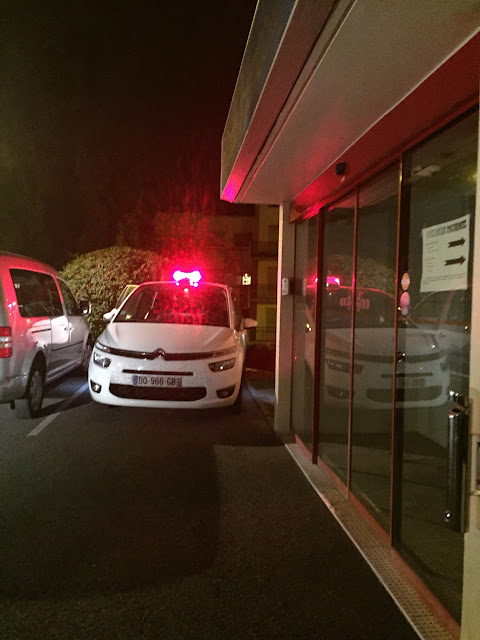 Nothing about sitting in the back of a taxi for 45 minutes in the parking lot of a kidney dialysis center was even remotely normal.

First off, I’m not in kidney failure. Oddly enough though, it’s part of the story…

I’m not sure my sister, Susan and I have ever been on a trip that something very unusual didn’t happen.  It just doesn’t ever happen on the first day.

After what seemed like days of travel… oh wait, it was days… with multiple airports, countries, time
zones and wait times, we finally arrived at our ALMOST destination, Biarritz, France.  We were tired and it was late, or at least we felt like it was late, after 9:00 pm, and our cab, that had been arranged weeks before, didn’t show up.  We were about the last travelers left in the small airport when after waiting for a good 30 minutes, he finally showed up.  I add this in as its relevant to know the frustration that was starting to build along with the growing fatigue.  The airline, we later learned,
doesn’t post an arrival time (there was nothing on our tickets), but since it was the last flight of the day, with no connections, people just tend to guesstimate on pick up times and last night, our guesstimater was off by about 30 minutes.
Into the ride and more than anxious to be at our destination for the night, St. Jean Pied du Port, about 45 minutes away, our driver turned off the main road and into a parking lot in front of what looked
like a very small medical building or hospital, which was confirmed when what I’m guessing was an ambulance, squeezed by us.  He then said something in French, got out of the car and went into the
building.  Susan initially thought he has said “gas,” but clearly we were not at a gas station.  We sat in the dark, the street lights in the area being very dim, both of us silent.  Both of us curious.  Then Susan says,
“I’m not sure what is stranger… the fact that we’re in a cab sitting in the parking lot of a hospital… or the fact that neither one of us has said anything about it and we’ve been here for 10 minutes.

Very true.  So I got out of the car and went around to the front of the building to see exactly what it was and pieced together that it was a kidney dialysis center.  Like that explained anything!  We sat for another 25 minutes or so, both of us tired, frustrated and now totally puzzled by our situation.

I’ve got to back up a bit here and comment on the city of Biarritz, where we had just flown into.  It’s a popular vacation spot for the French as it’s a coastal city (which we couldn’t see in the dark) and is
known as a “playground” for those not on vacation budgets.  A San Tropez, if you will.  We, while
seated in the back of a dark cab, saw none of that, but do now know where to go for dialysis if the
need arises.  Even stranger, when I driver finally returned after half an hour, there was an elderly woman with him, who promptly got in the front seat and we were off.  No explainations.  No apologies.  Nothing.  And maybe it was strange that we didn’t even ask, but there was that whole
language barrier dilema going on and frankly, I think we both were just too tired to even go there.  The first thing I thought of this morning when I woke up was,

Did we really spend close to an hour in the parking lot of a kidney dialysis center while our cab driver was missing or getting dialysis himself of picking up someone up who had had dialysis (perhaps his mom??) while his customers waited patiently in the cab???  Or did I dream that?

The memory that will come to mind for me years down the road when I hear about the vacation
of Biarritz won’t be the sea or the charm of a French coastal city (neither of which we
saw), but rather will be the kidney dialysis center and the two of us sitting in the back of a dark cab
wondering why we weren’t more concerned or were we just too tired?
Once delivered to the door of our charming inn, the driver uttered his first words since he left us in
the medical center parking lot, then was on his way.
“Buen Camino.”

That alone undid a whole lot of whatever it  was that just happened.

Smiles.  On both of our faces.  Oh and on a side note… something weird happens to my ipad, this blog site, or perhaps  me, when I do blog postings from another country. I have no idea why, but spacing becomes an issue that I’ve not cracked the code on. Thank you for bearing with me… hopefully I’ll figure it…