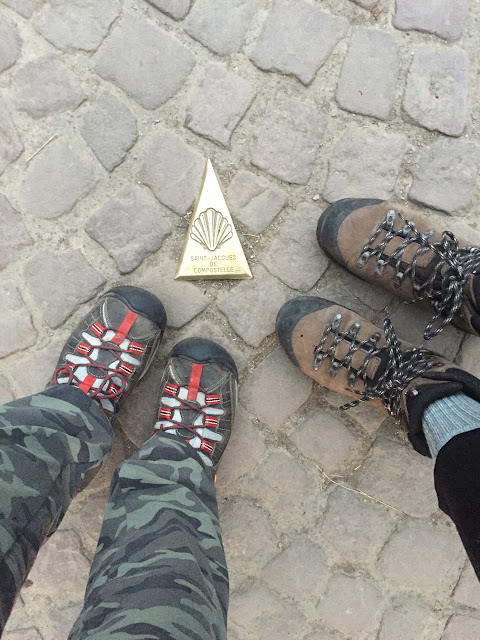 First off, the internet is off and on here, mostly off, so photo uploading is impossible.  I uploaded one in about 10 minutes.  New town, new internet connections, hopefully tomorrow.  Hopefully can post more then…

Today was hard.  Really hard.  Plain and simple.  But oh was it beautiful.

We were on the Camino by 7:30, which actually started right outside of our Bed and Breakfast.  The Camino is very well marked, and it’s first marking for where most people start walking, was a brass plaque set into the cobblestones.  It felt very exciting to cross it, even though yesterday, while walking around the small town, we crossed it countless times.  But today… today is official.  We are Pilgrims on the Camino, walking our journey.

The countryside was absolutely breathtaking and I’m afraid neither my photos or my words can do it justice, but I will try.  We walked into a low lying fog for several hours, at the base and well into the Pyrenees Mountains, which added to the mystic of our walk today.  As we climbed higher, we rose above the fog and it truly was mystical to look down into the valleys through a thick layer of cloud-like fog.  Susan and I, not necessarily planned, began to separate from each other, which really was a good thing.  I know for me, the setting and the one foot in front of the other for so many miles, were very fertile grounds for pensive thought.  I found that the trivial conversations in my mind subsided quickly and have to think the setting had a lot to do with that.  Besides, it was hard not to think about all those who went before me on this journey, starting a few thousand years ago.  Those people, clad  in leather sandals and wool robes, were the true pilgrims.  Although I’m retracing their steps, I’m doing it in high tech, quick dry clothing and am pacing out the journey in comfortable boots with good socks.  Not to mention a back pack to hold extra layers, a 3 liter water bladder and all sorts of food for those “just in case” moments.

As we ventured further and further into the mountains, the wind stared picking up and I spent a lot of time thinking about wind.  I don’t like it is what I came up with.  It was so loud that that whole thing about not being able to hear youself think really did come into play.  I had to walk with my head down, as I watched my feet inching forward so terribly slow due to the headwind.  If I raised my head, and believe me, I did that as often as I could as the scenery was so amazing, the wind would sting my face and blow the rim of my sunhat back giving me a bit of a “Little Debbie” look.  One man said he guessed the gusts to be near 70 mph.

When we passed into Spain, which was a no- event as really didn’t know it happened someone mentioned it, the “voilas” turned to “esta biens” quicker than you can say Camino and we couldn’t figure out why.  I felt like we were with the same group of people, more or less and they’d come and go leaving big gaps when you saw no one then there they’d be, all having a bit of a rest together.  It was strange though because at one point we were surrounded by French speakers and I swear, a couple of “around the bends” later, and Spanish was all we heard.  I’m happy.  I can talk again.

Today beat me up and showed me where my edges are and lo and behold, they extended out farther than I ever thought possible.  We hiked a good 9 hours, covering over 16 miles, most of it in the mountains.  We never really had a sense of how far or how much longer, which is just as good as it is bad.  Susan and I separated during the final downhill leg and I was so tired, with feet that were feeling slightly beat up, that when we did finally meet towards the end at a Camino sign, I didn’t recognize her.  Well, actually, I wasn’t really looking at her but heard a woman who I could see out of the corner of my eye, say, “Looks like we’ve only got 1/2 a kilometer to go.”  I responded with a, “Ok, sounds good…stood there for a good 5 or 10 seconds, then looked up and said, “Oh my gosh, I didn’t even know that was you.”  That was what she referred to as delusional tired.  Also a low point.

The other low point of the day, I’m not even counting the wind as it wasn’t a point, but rather, several hours, was when we got to the hotel and were told we were on the 3rd floor.  Of course we naturally asked where the elevator was and the very kind woman at the front desk, who looked so clean and fresh to our sweaty, grungy selves, said, “There isn’t one.  I’m so sorry.”

We both thought we were going to cry.  I’m not much of a swearer, but that’s exactly what I did for 4 flights up… 4 because it’s the European system and the ground floor is 0.

Beat up, sore feet, a bit of a mess but so extremely proud of what we did today.  We can’t think to far ahead to tomorrow as we’re still licking our wounds from today, but it was hard to not lean in an ear tonite at dinner when we heard the 100% chance of rain and muddy, slippery trails, I’ve got to admit, my heart kind of sunk.  I’m hopeful though…

On a side note, while thinking about 911, I had to think that as much pain as I was in from the fatigue and physical exertion, it pales compared to what so many are going through today. 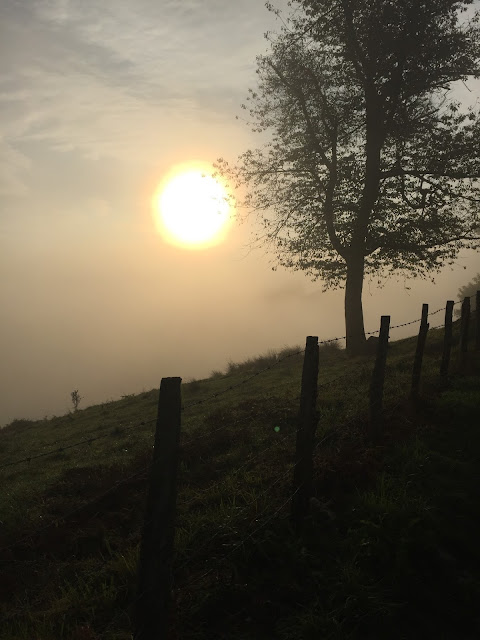 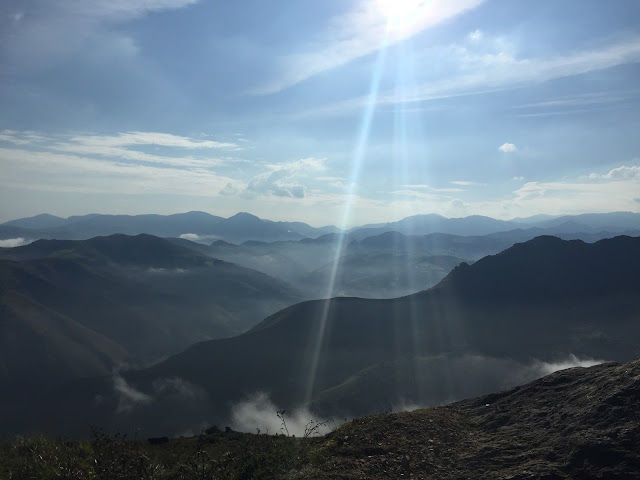 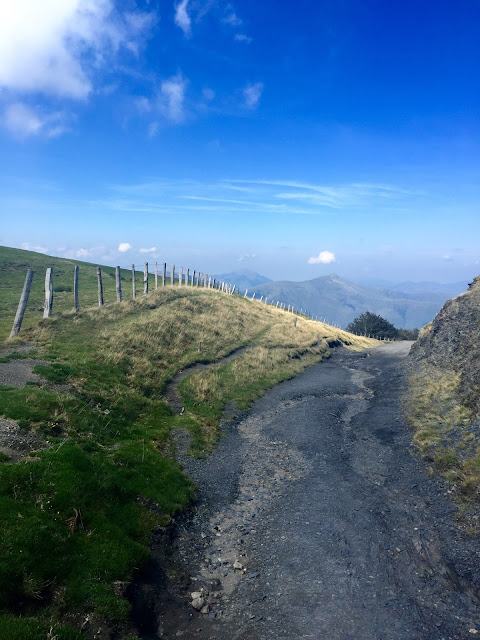 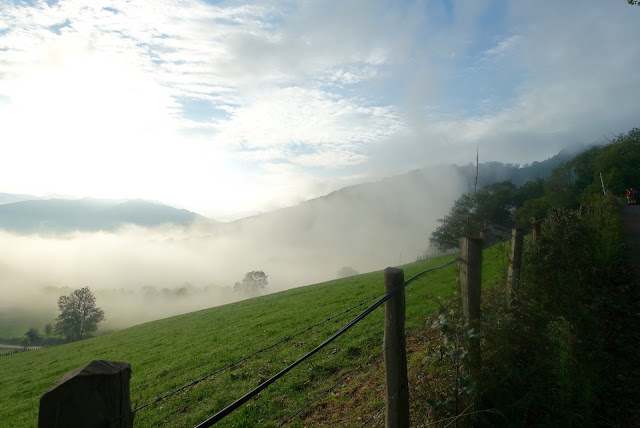 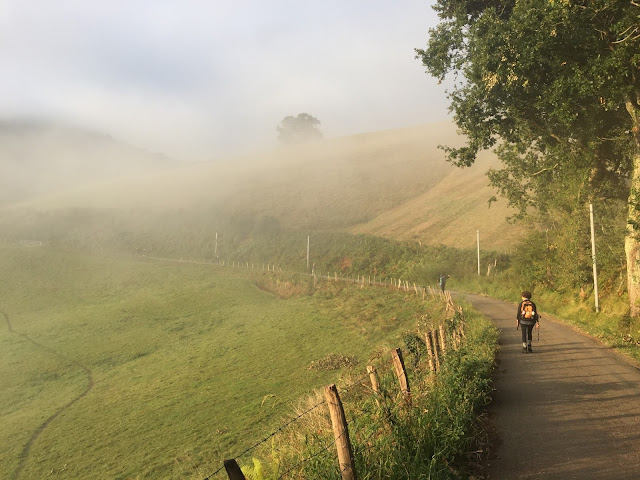