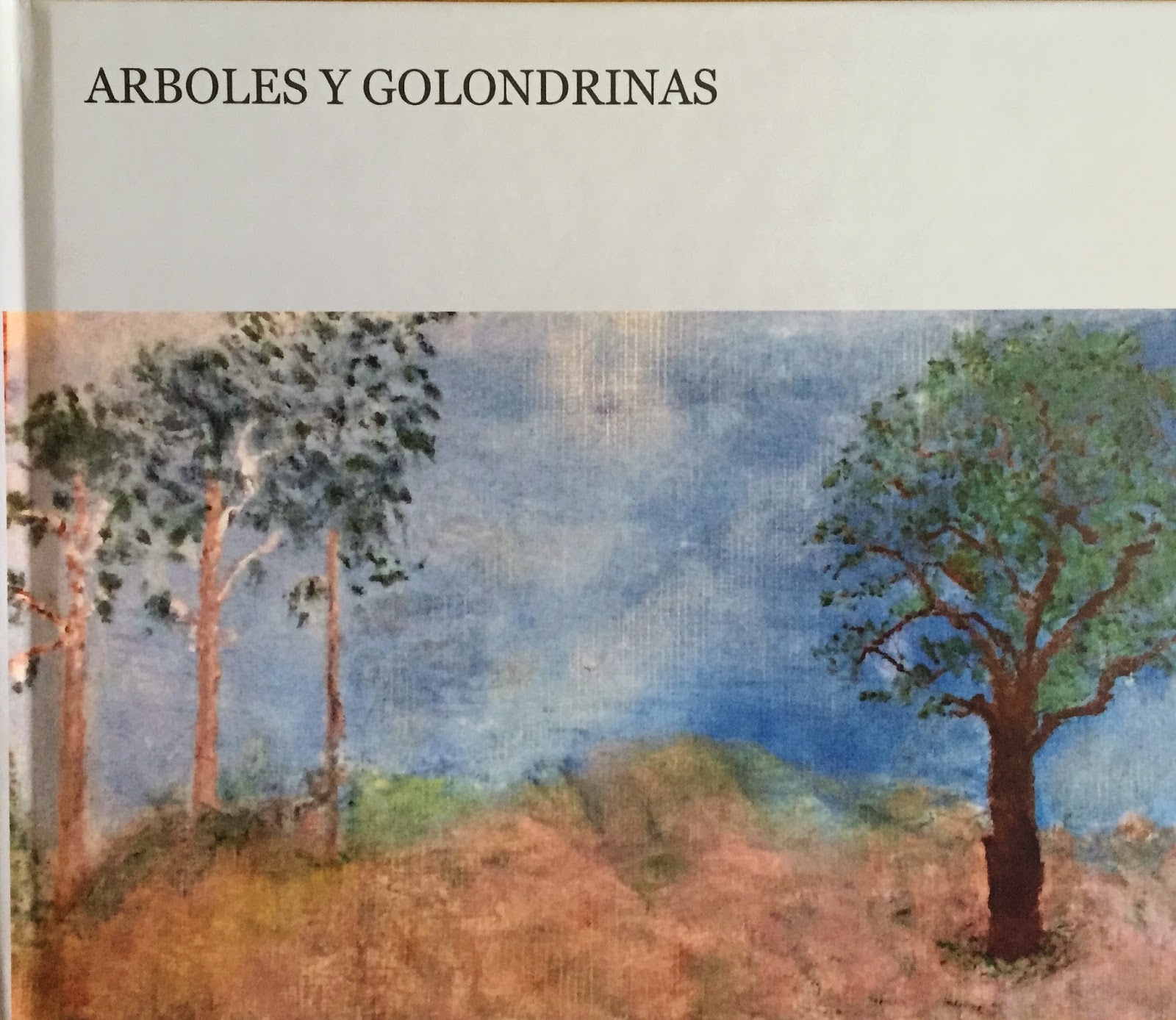 I finished the making the book for my friend from Ecuador yesterday.  Well almost and not quite.  Upon what I thought was the  completion, I ordered just one copy to check for mistakes then took it over for Marta to check it as well before ordering the 12 books that she wanted.  I was very pleased with the end result but given the history thus far on the project, knew not to relax just yet, a hunch that was totally correct.

Marta was standing at her front window waiting for me when I arrived, a gesture that I’ve become quite fond of, and has me on my punctual toes each time I visit.  Her living room looked like she was expecting company as she had moved all of her kitchen chairs into the room, and each chair held one of her original paintings as well as stacked, and paper clipped papers of text.  There was a system here and I knew not to question although I was somewhat  surprised as I had already reassured her multiple times that I had the paintings and the text pages in the proper order.  I thought we had already jumped that hurdle.

She loved my “sample” hard copy book, much to my delight, yet still walked around the living room checking my page order with the stacks of paper on each chair.   She did find a couple of small mistakes, errors in her spelling on some of the Spanish text and I agreed that I would keep the book with the mistakes as my own, would make the necessary corrections then would order the 12 books she wanted.  She wanted to pay me right then and there,  but I insisted we wait until she had all 12 books in her hands and was pleased with them. We agreed to meet for lunch once she received the books and she could pay me then.  So last week, as agreed, we met at a neighborhood restaurant that she liked that ironically happened to be French and enjoyed  the lovely French cuisine while conversing in Spanish the entire time.   The language section of my brain, opened up then got confused, as I was “merci-ing”  in the middle of a totally Spanish conversation.  I felt very European.

That was last week.  Since then, my friend has found things in the book she wants to change, which means another order and unfortunately, a big expense for her.  I tried to talk her out of it as the books are not cheap, but she insists that they be perfect and said she will only publish one book in her lifetime and this was it so it just had to be perfect.  She apologized for having pushed me to get them done so quickly but said she was nervous she wouldn’t make it to her 80th birthday, a comment that I have argued more than once with her.  When the book was finished she told me she was relieved and will not worry about dying before December.  I don’t know how to say “stop over thinking the dying stuff” in Spanish but gave her a smile that communicated my thoughts and she smiled back.  I’m starting to understand her humor and she mine.

That was a few weeks ago and the same process of ordering, proofreading, correcting and re-ordering has now happened, twice.  Last week, I think we finally reached a point where we’re both satisfied, but my fingers remain crossed and my breath held.

This has been far more of an ordeal than I ever thought it would be when I signed on, but it has been about so much more than a book of paintings and text.  Last week I spent 2 hours conversing in Spanish with my new friend and felt so comfortable with it that at one point I actually forgot that I was slogging through a language that wasn’t my mother tongue.

As I was driving home from that last visit,  I realized that the many trips to her house to do and re-do were far less about the book that we were jointly creating and far more about the friendship that was developing.  I think about Marta and I smile.  It’s been a synchronistic connection that I think we both needed and the timing was impeccable.

The book, by the way, is a lovely story which showcases Marta’s love for her children as well as her love for trees.  She represents each of her 6 children as golondrinas, a bird that is common to Ecuador, who one by one leave the nest and find their tree to begin their lives as adults.  Many different trees are represented, including a saguaro cactus, which represents her son who lives in Arizona.  One of the paintings shows one of the birds returning to the mother with the text “trata otra vez” (he tried again).  I was that kid.  I get it.  No doubt her children will be very touched by the paintings and the story that accompanies them, especially given that they haven’t yet learned that she know how to paint!

Sometimes getting to the prize at the end of the proverbial tunnel isn’t what you thought it would be.  I’ve got a new book to add to my growing collection of books I’ve made, but the gain here is not in the pages of that book but rather was the added gift of an unexpected friendship. There is always a purpose behind our chance meetings with people and some of those  relationships continue as they are needed in one way or another, while others fall away.  I’m hopeful that the friendship I’ve found with Marta will continue far beyond the pages of a book.