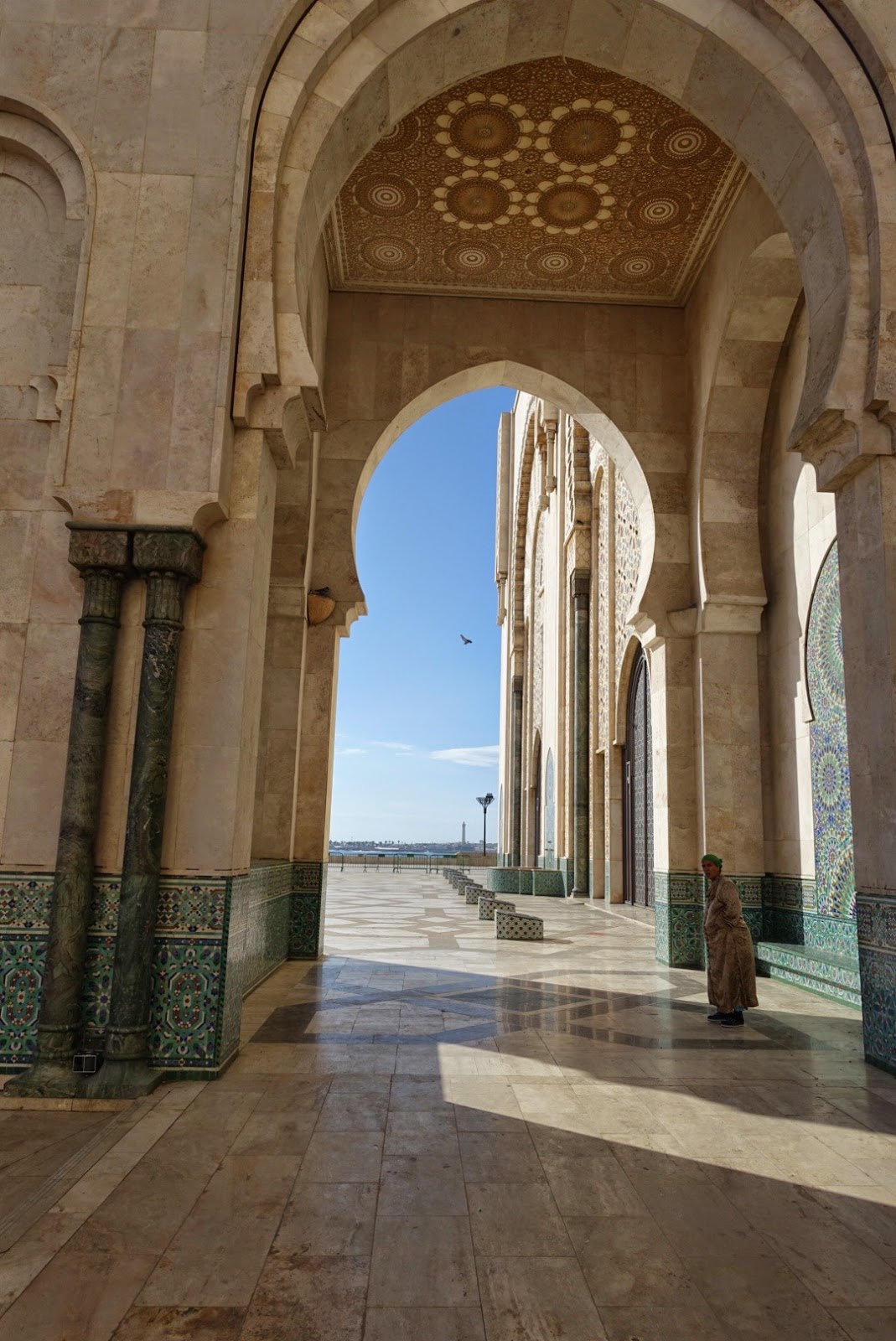 We were without the internet in the house for the past two days and once over the initial… “now what?”… I’ve got to admit, it was nice.  Something happened that I remember fondly from my time volunteering in Perú and that is conversation.  The four 20 somethings in the house did not share that sentiment and not knowing what to do with their hands, their minds, their attention, they left the house for some night life.  Dee Dee, Mimi and I sat around and chatted… something I’ve missed. But now it’s back and we’re all connected, especially the 20 somethings, who appear to have regained their will to live.
I took the train to Casablanca today, a little over an hour away, with Mimi and Dee Dee this morning.
Our first sense of accomplishment came early with successful maneuvering through the prompts on
the machine where we purchased our tickets.  Suffice to say, it took several attempts but when tickets
(and even to the right place) and change popped out of the orange slot on the machine, there was a
unanimous sigh of relief.  People are very friendly and helpful here, although that help usually comes
in the form of French, not English.  Few (I can count on one hand), have been able to offer assistance in English, but I expected that.
The station as well as the train were both incredibly clean and modern, making for a nice, easy ride. The station in Casablanca was a beautiful surprise – almost like a large shopping center,  although most of the stores were closed.  Today is a national holiday for the Moroccans, which is why we weren’t working and could travel in the first place.  I’m learning that there are many national holidays in this country (we will have next Tuesday off as well…).  Today was the celebration of Morocco
taking Western Sahara from Spain.
Much to our surprise and delight, we were greeted with a two-story Starbucks as we made our way
up from the platform… a very welcome sight!  A  couple of sips into my coffee made me realize how bad the coffee at the house is.  It’s instant coffee that’s been boiled and is served with hot milk.  Tea doesn’t seem to be available unless it’s the traditional Moroccan mint tea, which is only served at
lunch at with far more sugar than I’m normally used to.  I don’t usually like to hit up the American sites when traveling outside of the country, but was very happy to enjoy a Starbucks this morning. 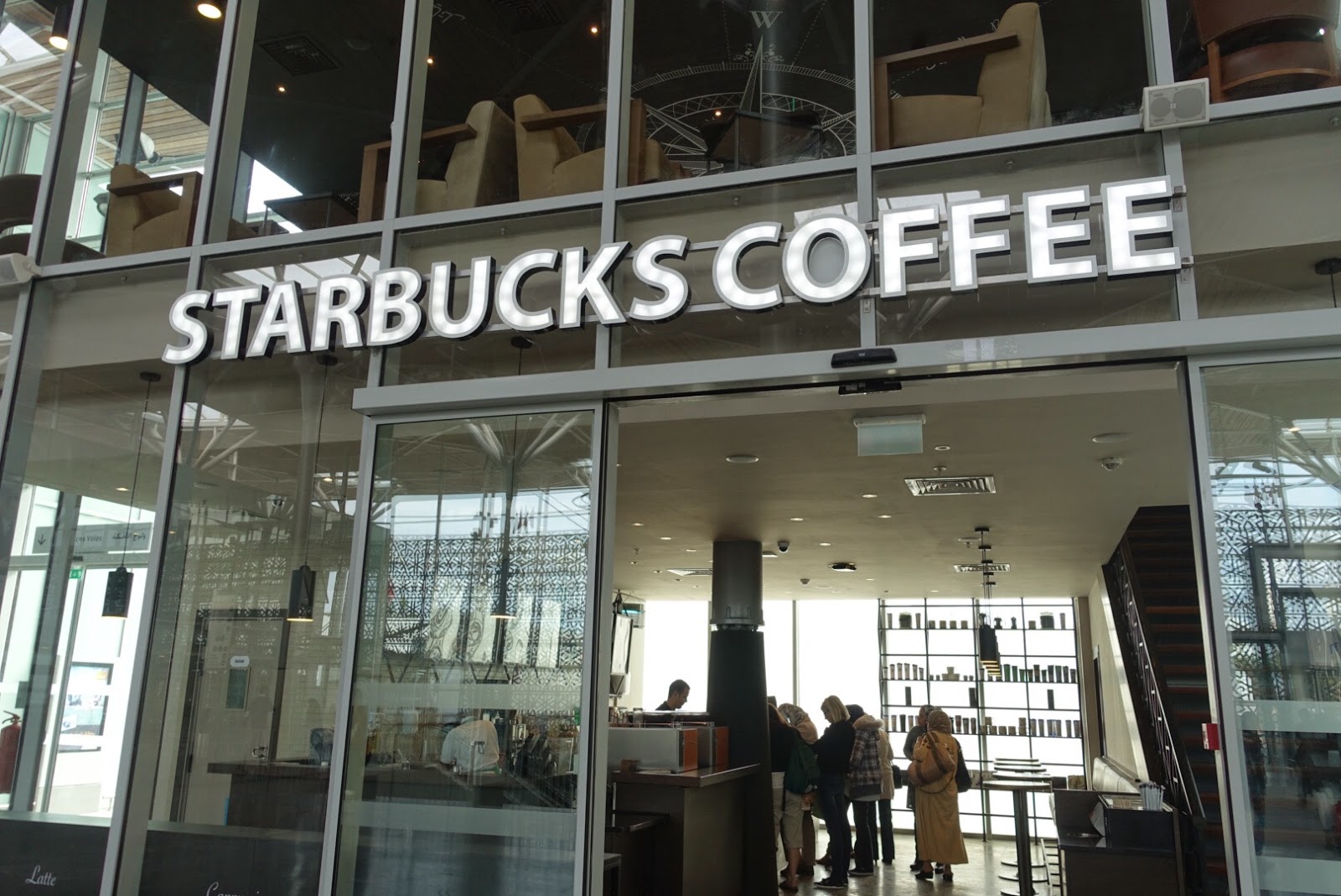 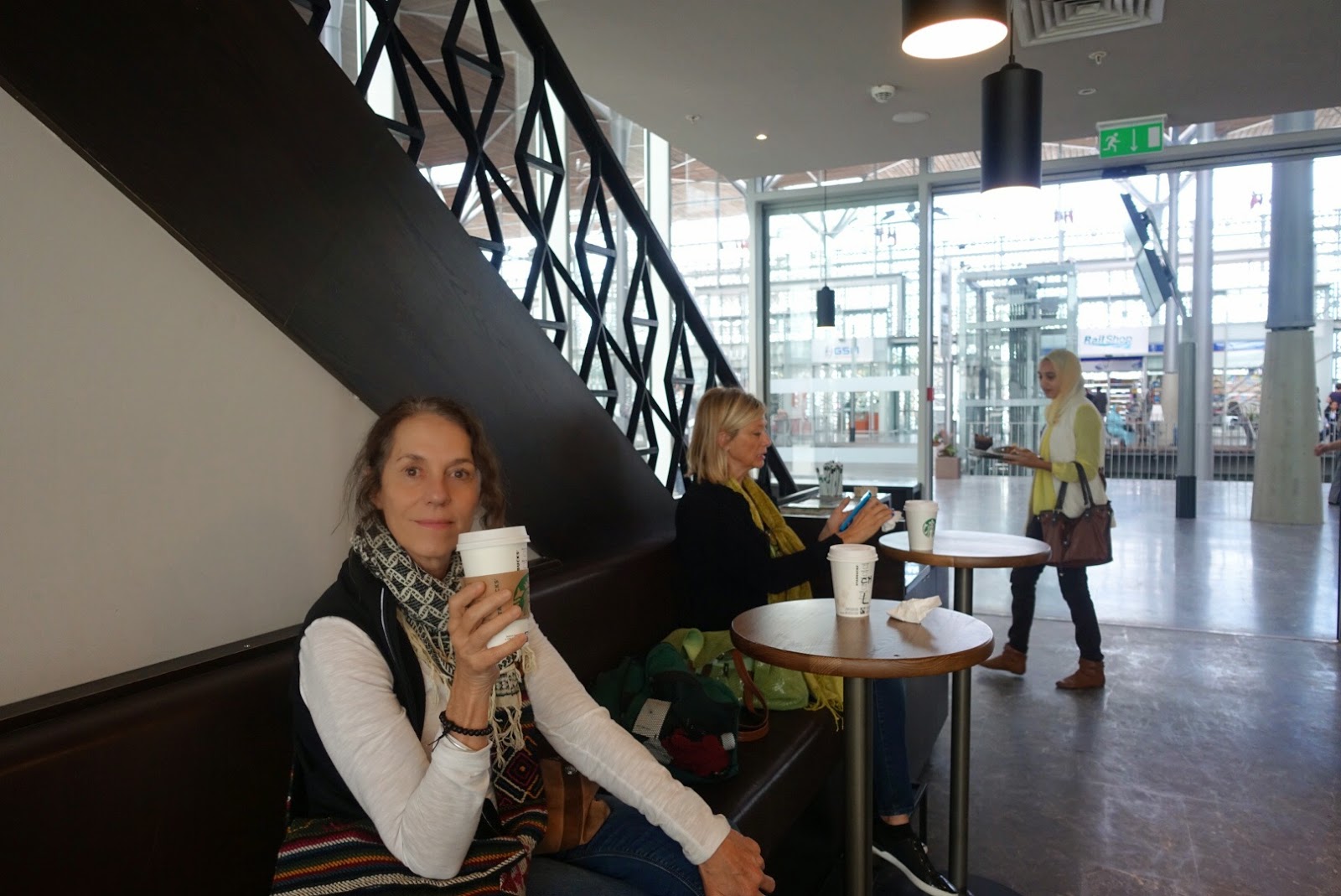 The main attraction in Casablanca is the Hassan II Mosque, the 2nd largest religious building in the world after the mosque in Mecca.  It was completed in 1993 after 6 years of construction by
35,000 craftsmen and had a price tag of over half a billion dollars.  The price tag fell upon the people of Morocco, with even the children offering up their pennies to help pay for it.  We arrived 20 minutes too late for a tour, and really didn’t want to wait 2 hours for the next tour, so asked one of the guides if it would be OK for us to go in a bit late.  No.  There were no exceptions.  Dee Dee added that we were staying in Rabat and were volunteering in the orphanage (where her placement is).  It
was like Dorothy explaining to the wizard that we had come all that way…

“Well in THAT case….

I don’t think any of us like playing the “volunteer” card, but it is nice to gain the respect from the

locals when they find out why you are here.  Well played, Dee Dee. having private tour was nice.  I
must say, as elaborate, exquisite, grand, enormous and incredible as it was, I found myself somewhat
offended by the huge gesture of grandeur that this King built in his honor.  It was built BY the people,
but clearly is not FOR the people.  First of all, it was close to $10 to enter, so was clearly for tourists.
Although the call to prayer went off while we were there, no one was coming in to pray.  It felt overly large and far too empty.  Many of the rooms were for “show” only (our guide shared that with us as I asked..), such as the rooms for ablutions (where the  body is cleansed before prayer).  In a city with so much poverty, to walk into a large intricately tiled
room that’s only used as a display for tourists, seemed like the wrong way to spend so much money.  From what I’ve read, many of the locals feel the same way.  I am glad we went though, and was
happy to be able to step inside, especially given that it is the only mosque in Morocco that a non-
Muslim can enter. 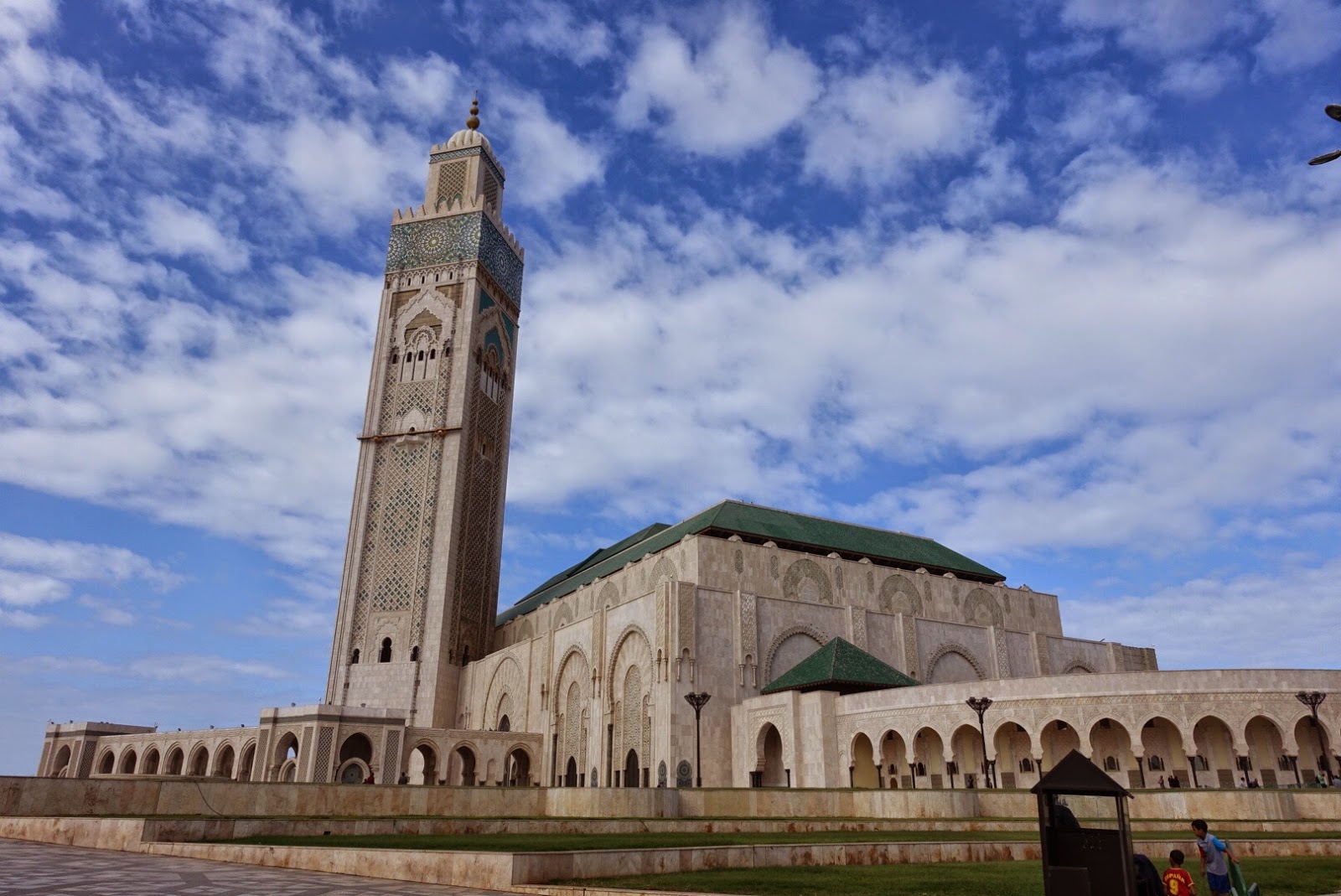 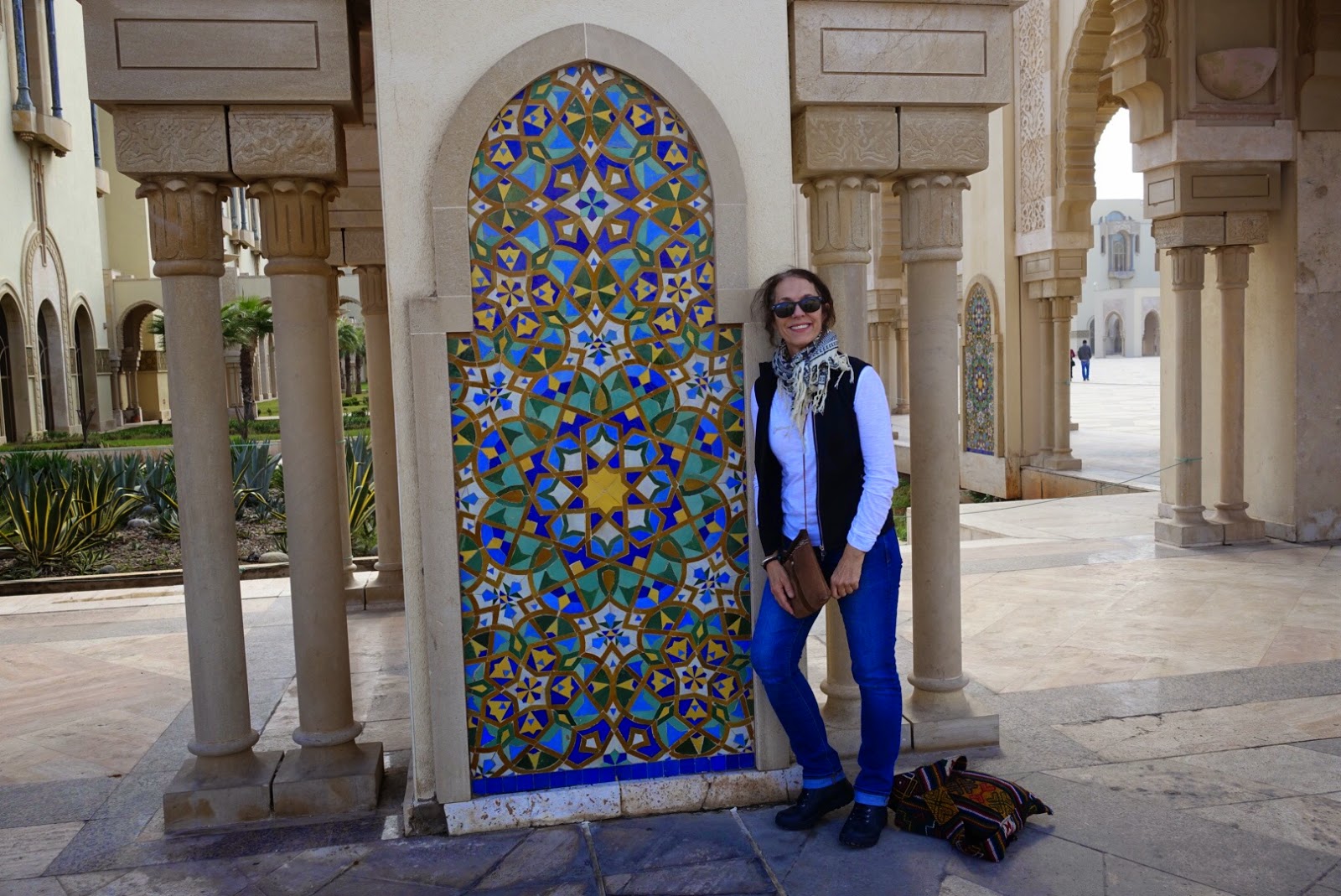 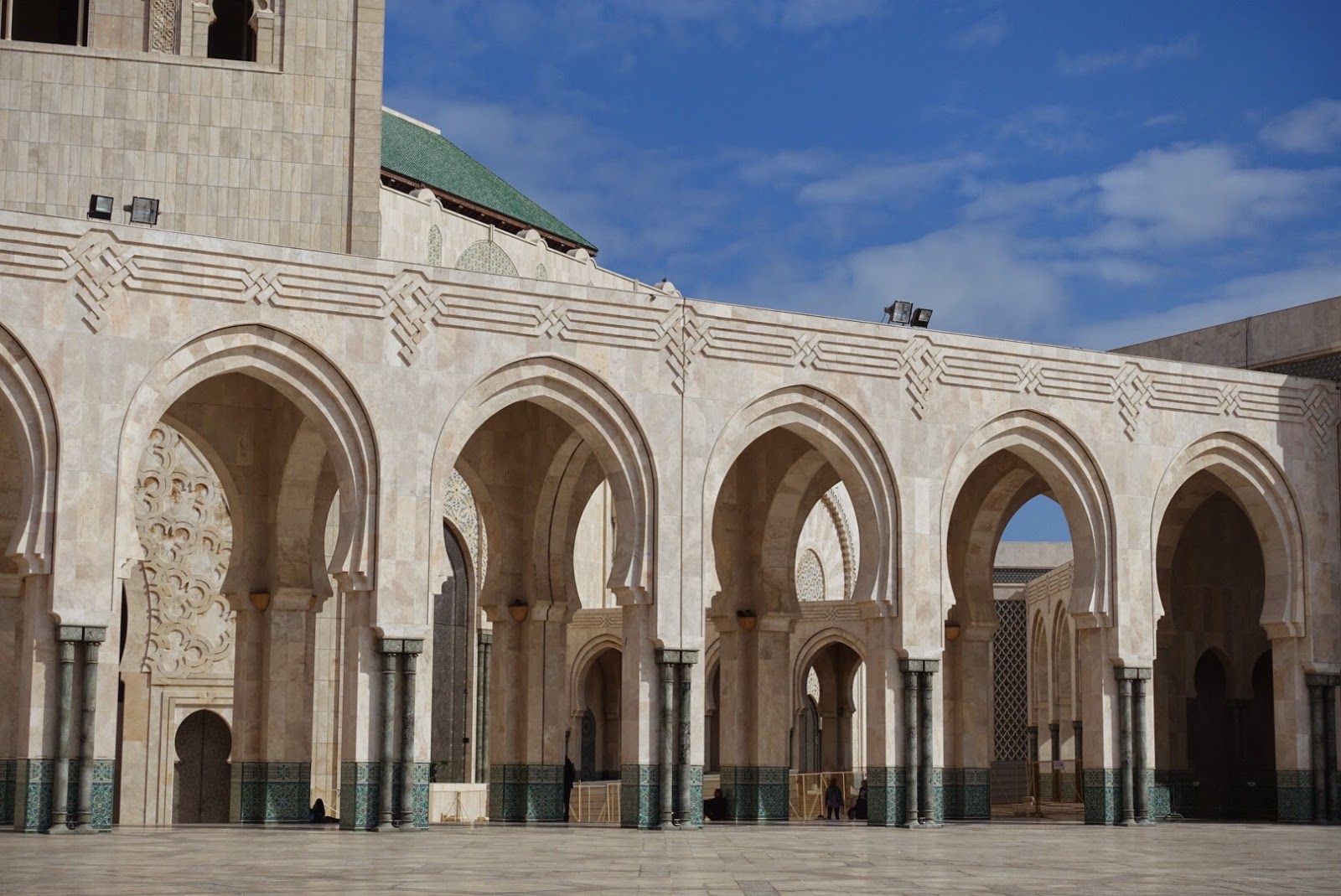 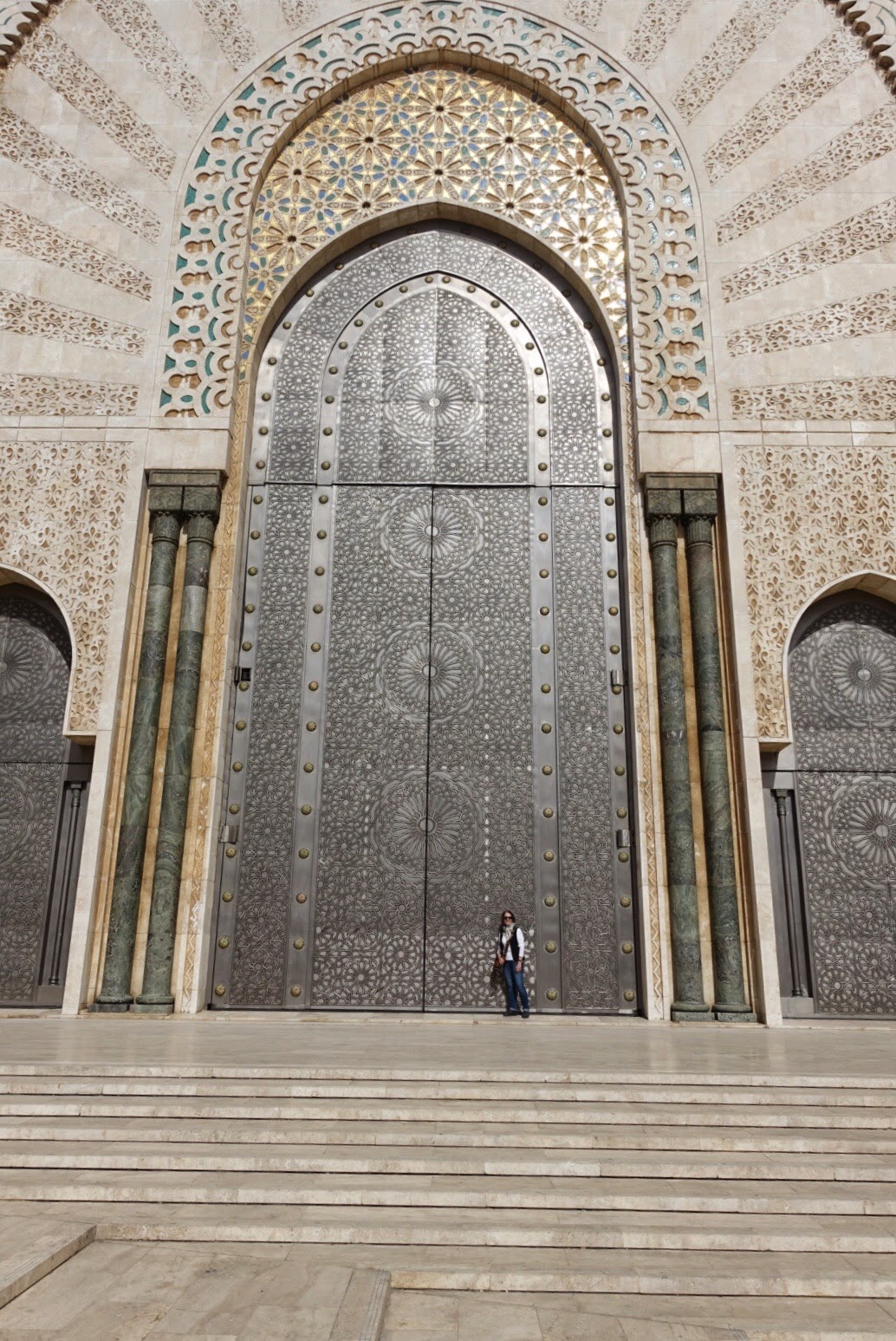 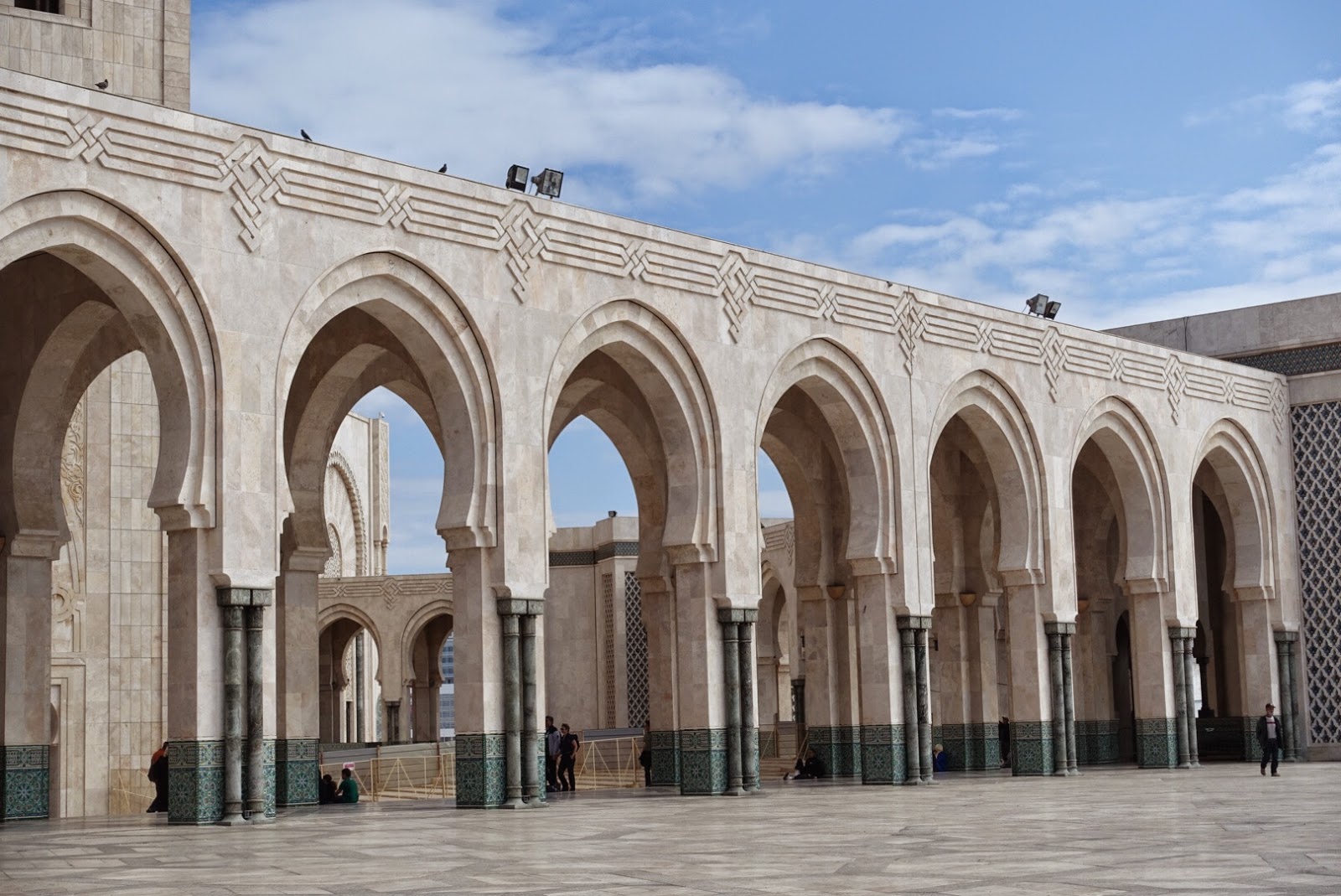 The other highlight was a delightful lunch at “Rick’s Cafe” (from the movie, Casablanca).  Although the food at the house has been wonderful, it was nice to have a leisurely lunch in a restaurant.  OK, maybe it was the glass of wine that added so much to the enjoyment.  There was a note on the bottom of the menu, by the way, to any Muslims that may be dining there that some of the dishes may have alcohol in them so one should check before ordering.  As Mohamed has said, alcohol is against the law here, but is available for tourists… and tourists only….(I think there is a lot of turning a blind eye that goes on around here…) 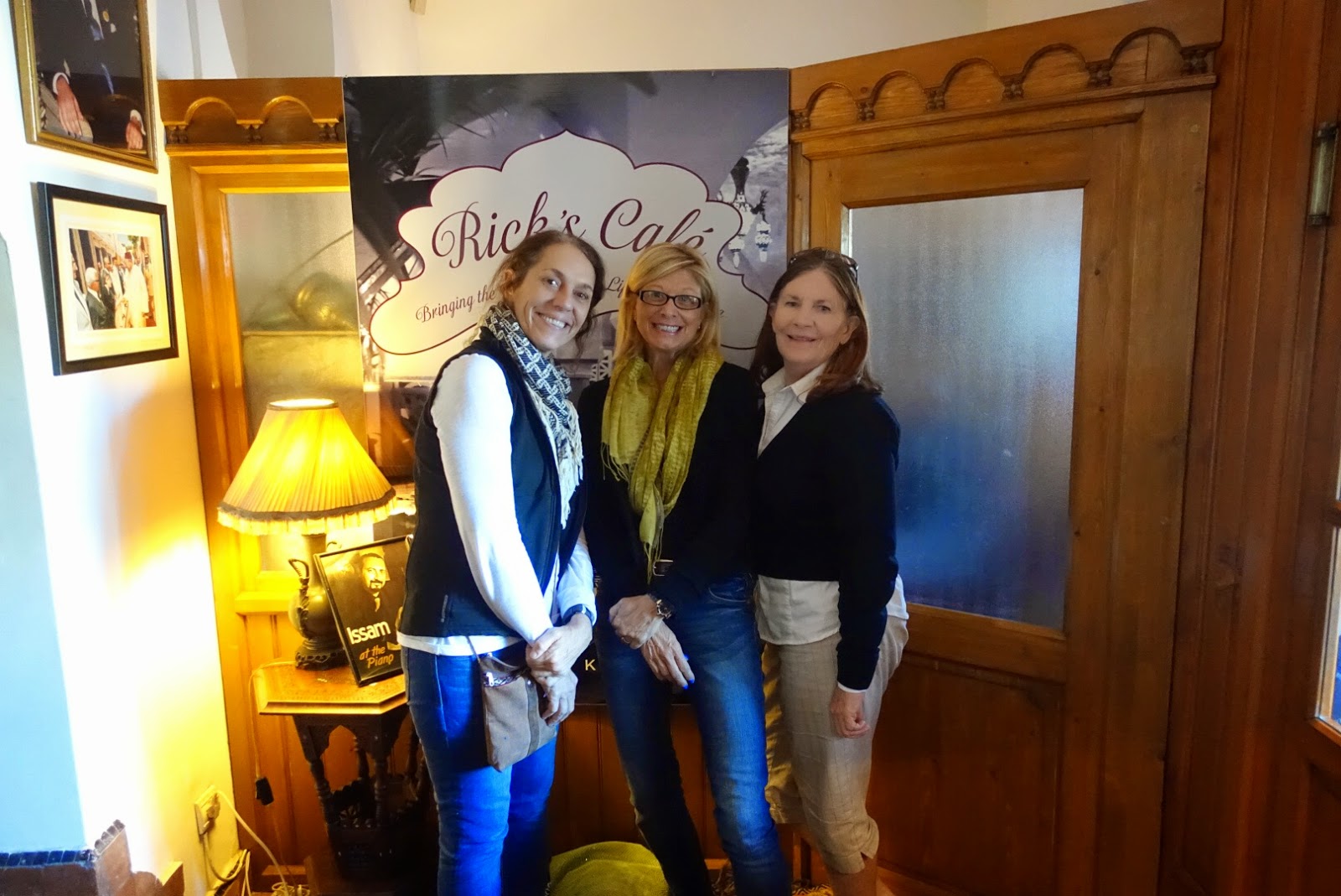 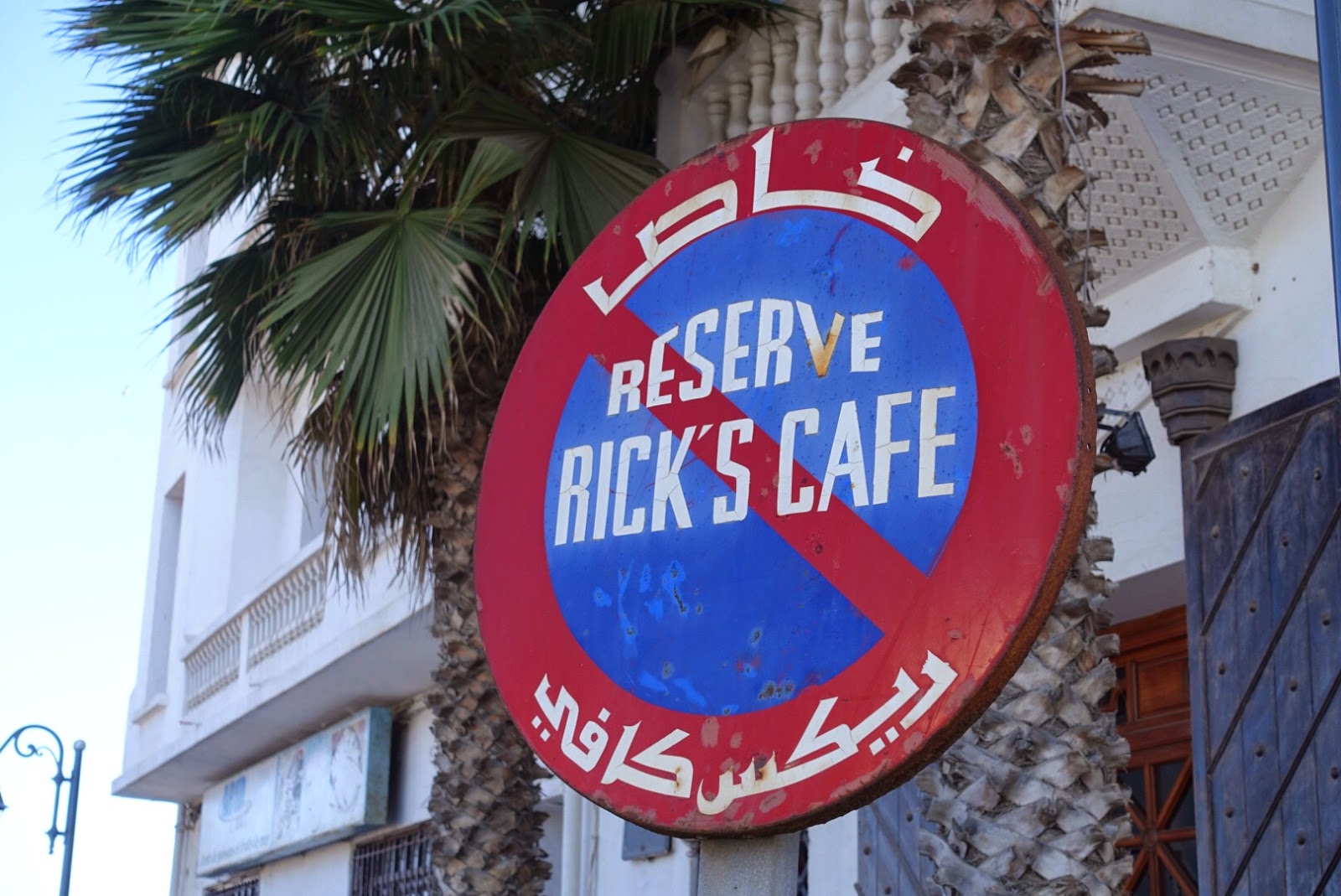 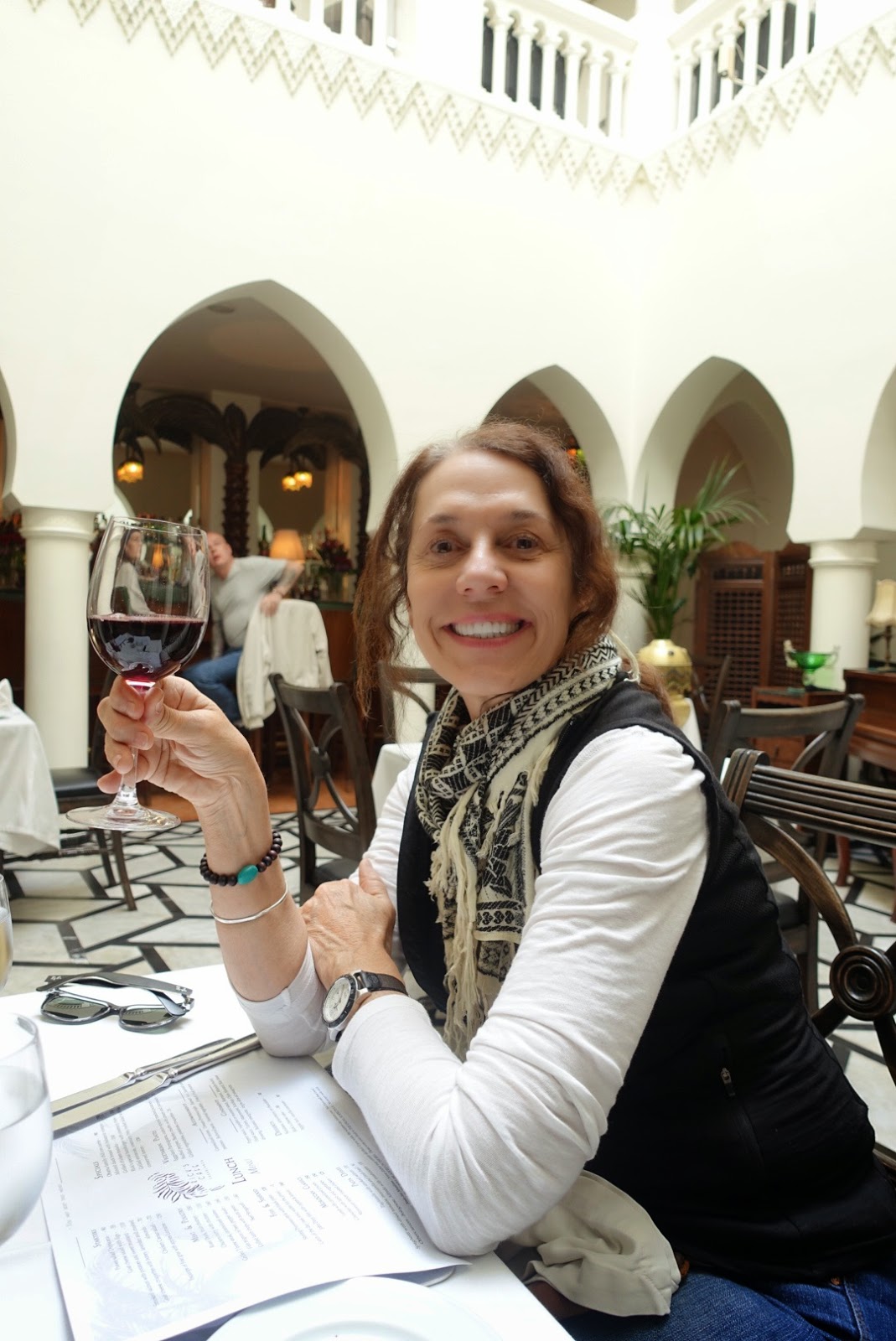 One last observation… I noticed small rooms at the train station, one for men and one for women, where shoes are removed at the doorway and people can slip in to pray during the calls to prayer.  I saw several men going in, but no women.  I asked some of my students about this the other day, and one of the gentlemen told me that it’s more important for the men to go pray than for the women.  I’m not sure how accurate that is, but from what I observed today, it seemed like the women were too busy tending to the children to slip into the rooms for prayer.  I suppose what has struck me the most about the call to prayer is that the women and the men pray separately.
We made it back to the house just in time for dinner, but I must say, I’m still pretty full from lunch.  Great day!

Tomorrow the language school is closed, so I will be spending time at the orphanage.  It won’t be easy.  That I know for sure.