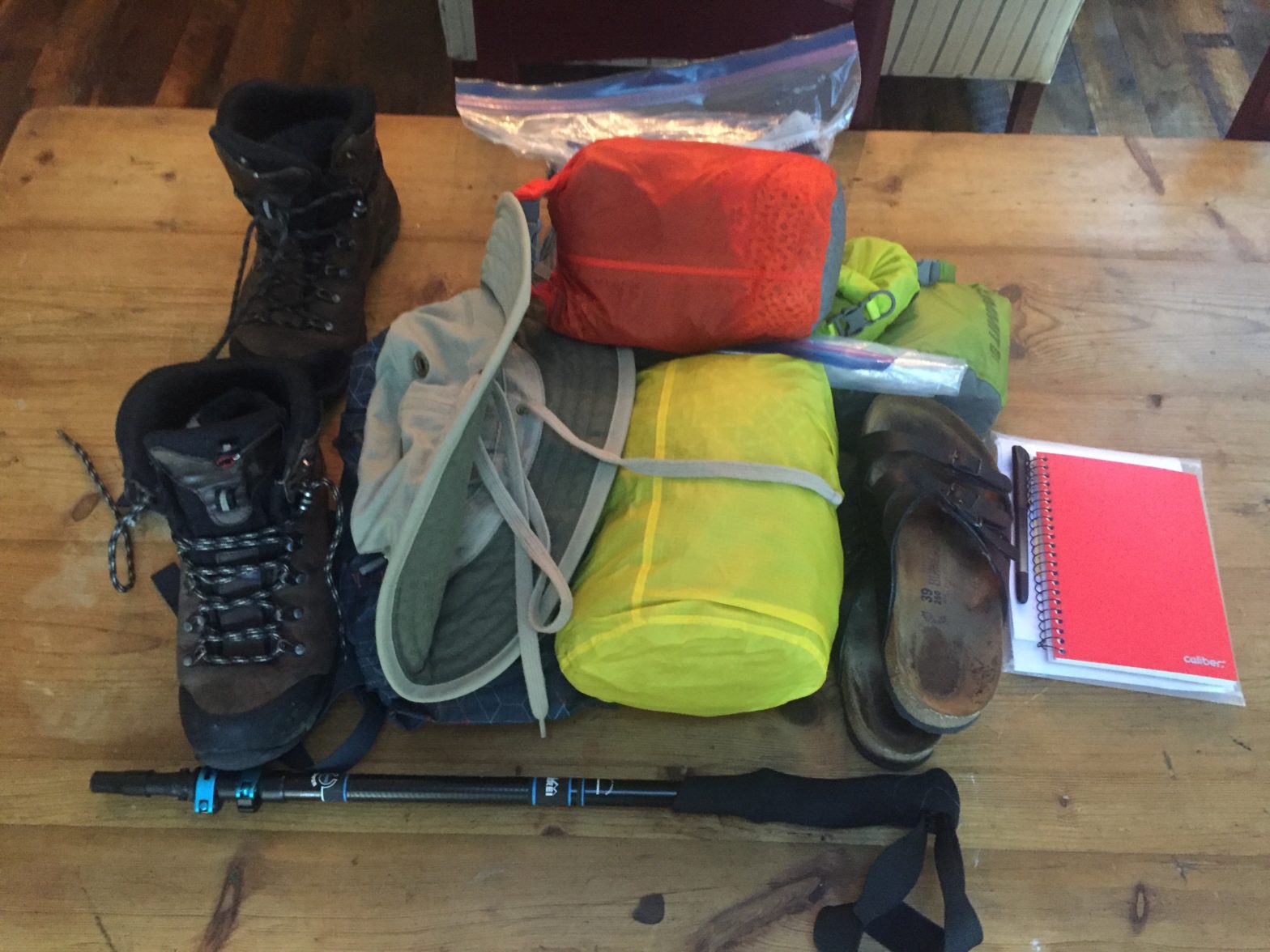 Never before I have spent so much time packing such a small amount of stuff to be gone for such a long time.  In a few days, I’m headed back to walk the Camino in Spain with my sister, Susan, finishing what we started last year, with approximately 400 miles left.  The big changes we’re making this year is that we have decided to carry our gear rather than have it carried for us,  while we carried a small day pack to hold the day’s necessities.  Suffice to say, the packing, or more accurately, unpacking, has become quite a challenge.  What it boils down to is being forced to make the decision between want and need with each and every item before it is put into the pack.  The difference between want and need easily came into play when I took the pack (newly named armoire, or arm for short), for a spin.   That cute gray striped shirt?  Want.  The bottle of hair conditioner?  Again, want.  Who knew that I really needed so little?  (heads up, I’ll have variations of the same outfit in all photos for 30 days and my hair will be an unconditioned fright…).  And I’m not done with the thinning yet.  What I won’t be stingy with is the water, and at 4 pounds a gallon (the size of my hydration bladder), it will claim 1/5th of the weight.   I couldn’t help but think of Cheryl Strayed’s 50 pound pack in her book, “Wild” and how she had to back herself into as it was too heavy for her to pick up and put on her back.  My newly lightened pack  seems more like a small clutch bag in comparison.

Several people have asked me why we decided to carry our own stuff rather than have it schlepped for us daily,  and recently,  while on a local trail and 7 miles in, I wondered that very thing, but only for a split second. This is the right decision.  No looking back.  No regrets.  To me it represents getting a handle on what is really necessary and what isn’t – both in life and on the Camino.  One of my biggest takeaways after walking 100 miles on the Camino last year is what a metaphor for life it became.  So many of the words that apply to life in a rather fluid sense, such as, “One foot in front of the other,” “You have more in your reserve tank than you even begin to tap into,” or “Life gives you what you need, when you need it,” became daily, very practical mantras for the both of us.  I remember one day Susan pointing out where we were going to end up that day and seeing the barely visible wind turbine on the top of what I’d call a small mountain was a very daunting site, especially knowing that we’d be walking our way there.  One foot in front of the other became my mantra that day.  It was also what kept me in the moment, rather than than in the head game of:  I want to be there NOW, it’s far, I’m bored, I’m not sure I can do it and why don’t we do beach vacations???  Carrying all of the “stuff” we will need for the next month figures into this for me.  It feels simple, utilitarian and efficient.  I have a sneaking suspicion that I’m going to want to do a major closet clean out when I get home, especially after having lived with so little.  Just a hunch.

I’ve read a lot of Camino posts on various forums and have come to the conclusion that there appears to be a lot of lying going on out there regarding pre-Camino packing and weights.  One woman said her pack weighed in at just under 12 pounds.  This same woman’s packing list included a sarong and a merino wool sweater for “evening wear.”  Good grief.  I won’t even add in my tinted Burt’s Bees for my “evening wear” simply because of the weight!  There is NO way her pack could have weighed 12 pounds if she brought other clothes, even if the sarong was made out of net.  The numbers simply don’t work, unless maybe she doesn’t drink water or wear socks.  I’m feeling pretty darn proud of my pack, tipping in at 19.6 pounds with a full bladder of water.

That weight just happens to be what my middle child, Grant, weighed when he was almost a year old.  All of my family know that I spent most of his first year with him in a front pack or perched on my hip.  My kids truly believe that that is where the saying “Carry Grant” comes from.  He was fussy.  He wanted to be carried and so we did, or more accurately, I did.  Hey, I’ve got this!  I’ve done this before only this time my pack won’t be crying AND I won’t have to feed it!  Who knew what preparation I was giving myself for 28 years in the future?

I’ve gone out for the past 5 days, on a local bike trail, to test the pack, but more importantly test my body carrying the pack.  I really do believe that after taking out a couple of things, on the next walk I’m going to have a “holy cow, now that feels great!” kind of reaction.  That’s not exactly happened, but the carrying has gotten easier, and probably not because I took out the night shirt and hair conditioner, but because bit by bit by tiny bit, I’m getting stronger.

I look a little over-exuberant on my local bike path decked out in hiking boots and a frame pack and the expressions on the faces of people I pass reinforce that.  OK, not really, no one bats an eye, but that’s how I feel.  I did have a little girl ask me yesterday where I was going and not wanting to bore her or the woman who was with her (her grandmother?) with the whole pilgrimage or the Camino or even the Spain thing, I answered her, “To the parking lot.”  She looked confused.  Poor tyke.  I should have said something a little  bit more exotic, like Montana… or Nebraska…anything but the parking lot.

I’ve probably got a couple more rounds of taking everything out of the pack, removing a few things, then hesitating and adding at least one back in then re-stuffing it all back into the pack. It seems to be my hobby these days and a necessary part of the process, not just in the weight control department, but in mentally preparing and processing exactly what it is that I’ve got ahead of me.  That being said, I’ve heard countless times that the Camino will provide you with what you need, when you need it.  I think I’ll take out more stuff…

6 thoughts on “Packing, unpacking and readying myself for the Camino.”