I love winter, really, I do, and anyone who knows me at all knows that.  I do NOT complain about snow, ice and wind chills that are in the single digits and below, but once the temps go over 85, combined with the predictable  KS humidity,  all complaining bets are off.  My sister says that summer officially starts when I start complaining.  I suppose that’s true, although I can’t say that I’m very proud of it.

And I still love winter, even after having spent the better part of it in real winter territory… the mountains of Colorado, and I’ve not complained yet… yet….

Today I drove into Denver to go to REI to exchange my snowshoes.  Although I’ve used them multiple times, I’m not happy with them (a simple design flaw that results in a flapping strap, which becomes very annoying after a few hours…) .  I know that REI stands behind their product, so was hopeful to make a quick exchange and tie it in with a little field trip “to the city.”    I do enjoy my trips to Denver as a destination rather than a pass through on my way to the airport to fetch or deliver,  or on my way out of town (or into town, depending how you look at it).  It’s a pretty drive and still feels a bit adventurous to me as I really don’t know my way around, short of a few of my favorite spots.  Thank you google maps.  You’ve made trips on unfamiliar highways to places I’m not sure how to get to a whole lot easier.

I left Frisco late morning in jeans, a long-sleeved shirt, a fleece vest, down jacket, snow boots and a knit hat – clothing that was totally appropriate for the weather… here…

By the time I got to Denver, the temperature was 72.  Again, donned in down, fleece, a hat and snow boots, I did what I could to be comfortable and shed the outer layers,  but was still left in jeans, a long sleeved shirt and snow boots.  I didn’t feel out of place until I got in the store, then my boots just seemed big and clunky next to sandals and tennis shoes.  I kind of felt like I had come down from the hills…  Oh wait… I had…

The store matched the weather and had made the big switch from winter gear to summer gear and the snowshoe corner was now filled with bike gear, which meant that a simple exchange of my snowshoes was not going to happen, unless I wanted to totally switch sports and go with biking instead.  The salesman helping me was very apologetic but I assured him that it really wasn’t a big deal and I should have thought ahead and dealt with the issue a few month ago while it was still winter at REI.  While he was explaining the winter to summer shift that the store makes, I was staring down at my pile of snowshoes heaped onto the counter (did I mention that it was two pair of snowshoes?  My guests can’t opt out of going with me simply because they don’t have the equipment… I’ve got ’em covered..)  I then realized that a small rubber band would fix the problem. Maybe that’s what I should have done in the first place before hauling 75 miles to the store where I bought the snowshoes – look at them for 20 seconds,  then use the hair tie that would most likely be on my wrist and fix the problem.  Oh well.  Since I was already in the store, and already in the women’s section (hey, how’d that happen?), I quickly perused the new spring/summer inventory and found a red rain jacket that seemed to want to go home with me.  Spring was in the air, with rain in the forecast,  or at least in Denver.  I drove almost to Evergreen before I had to put the windows up, and even had the air conditioning on for a bit until I realized that part of the heat issue was that my seat heaters were on.  I don’t think they’ve been off since October.  Once past Evergreen, I was back in business with high 30’s,  and heat and hat quickly followed.

On a whim, I pulled off at the Bakerville exit, which is where the trail head is for Torrey and Gray mountains, my 2nd and 3rd fourteeners that I climbed back to back last summer.  I only drove as far as the trail head sign because the road was not plowed and I had a pretty good view from where I parked on the side of the road, with the trail head sign in the foreground and the two mighty peaks behind it.  It was the perfect pondering place to recall that very early morning last August, when with much anticipation and fear, I drove up that road in the dark for 2 miles of about as rough of terrain as I had ever driven on.  I was more afraid that morning than I had been during my entire CO stay last summer.   I was afraid I’d get stuck and even worse, because I had no cell phone signal.  But what really scared me more than anything was what was ahead…several miles up two different mountains, both measuring in at over 14,000 feet and crossing the saddle that connected them.   I needed to sit in that spot, feel how afraid I was and remember that I kept on going. 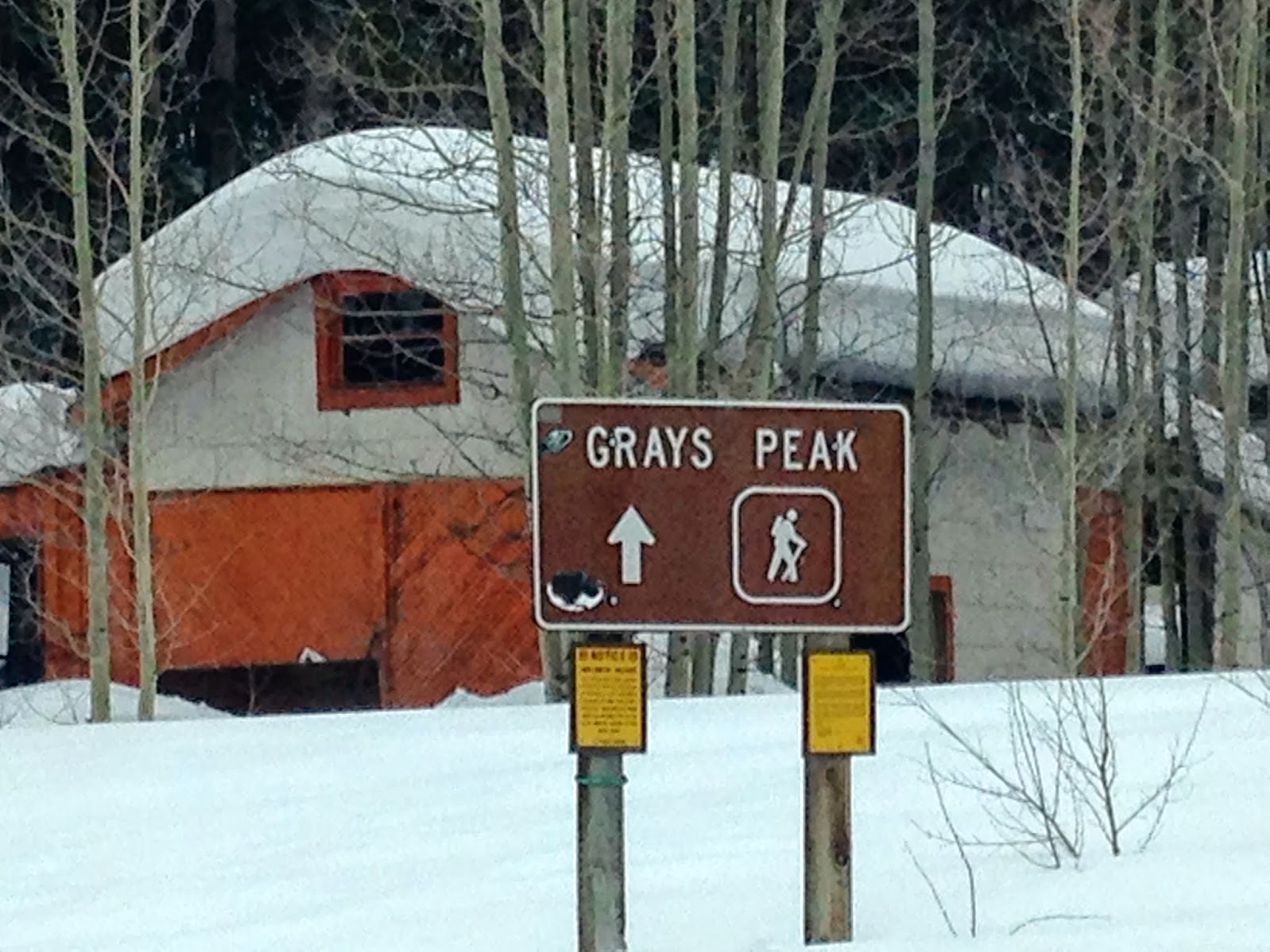 I’m learning to listen… to everything… to the nudges that life gives you to slow down and pay attention because it’s trying to tell you something… something that you need and most likely don’t even know it.    I needed to see those mighty peaks today and remember that strength followed fear that day in August and if it did it then, I’m guessing it could do it again.  And more importantly, I needed to stop and listen to what the mountains  had to tell me…

And that’s why a 3 1/2 hour round trip drive to Denver for a 15 minute run in and out of REI that did not result in different snowshoes but rather a rain jacket that I probably didn’t need, was totally worth it, but I didn’t realize that until I made the Bakersville exit detour and I wasn’t sure why I took the exit at all until I sat in front of the two mountains.  I’m glad I felt the nudge.

By the time I got back to Frisco, it was winter again – real life CO winter with wind, snow and temps in the low 30’s.  It is almost April and  6 to 8 inches of snow is in the forecast for tonite and more snow tomorrow.  I’ve not looked ahead, but think the snow trend is supposed to continue for the next several days.  Again, I love winter, but…

I heard that Spring doesn’t really arrive until June(ish) and that it’s more commonly known as mud season around here, rather than spring, which then rolls into summer.  So is that when the forsythias bloom and the tulips come up?  Through the mud?  Not that I’m doing the math, but I skied in mid-November and from November to June is 8 months.  Oh yea… that’s the other thing I heard.  Winter here is 8 months.  OK, I suppose I am doing the math.

Still…I love winter and I still love Frisco, but oh my would I like to see a forsythia dancing in the spring breeze about now.  My little jaunt through crowds of spring-clad folks at REI made me really miss the excitement of those first warm spring days that have you wanting to clean out the garage, dig in the dirt and put on clothes that aren’t fleece lined or down filled.

I’m headed home, home to KS, in a few days, unless the snow storm keeps me here, and if it does, then I’ll throw ideas of forsythias and tulips out the window and will slip back into down and fleece and winter and will go skiing.