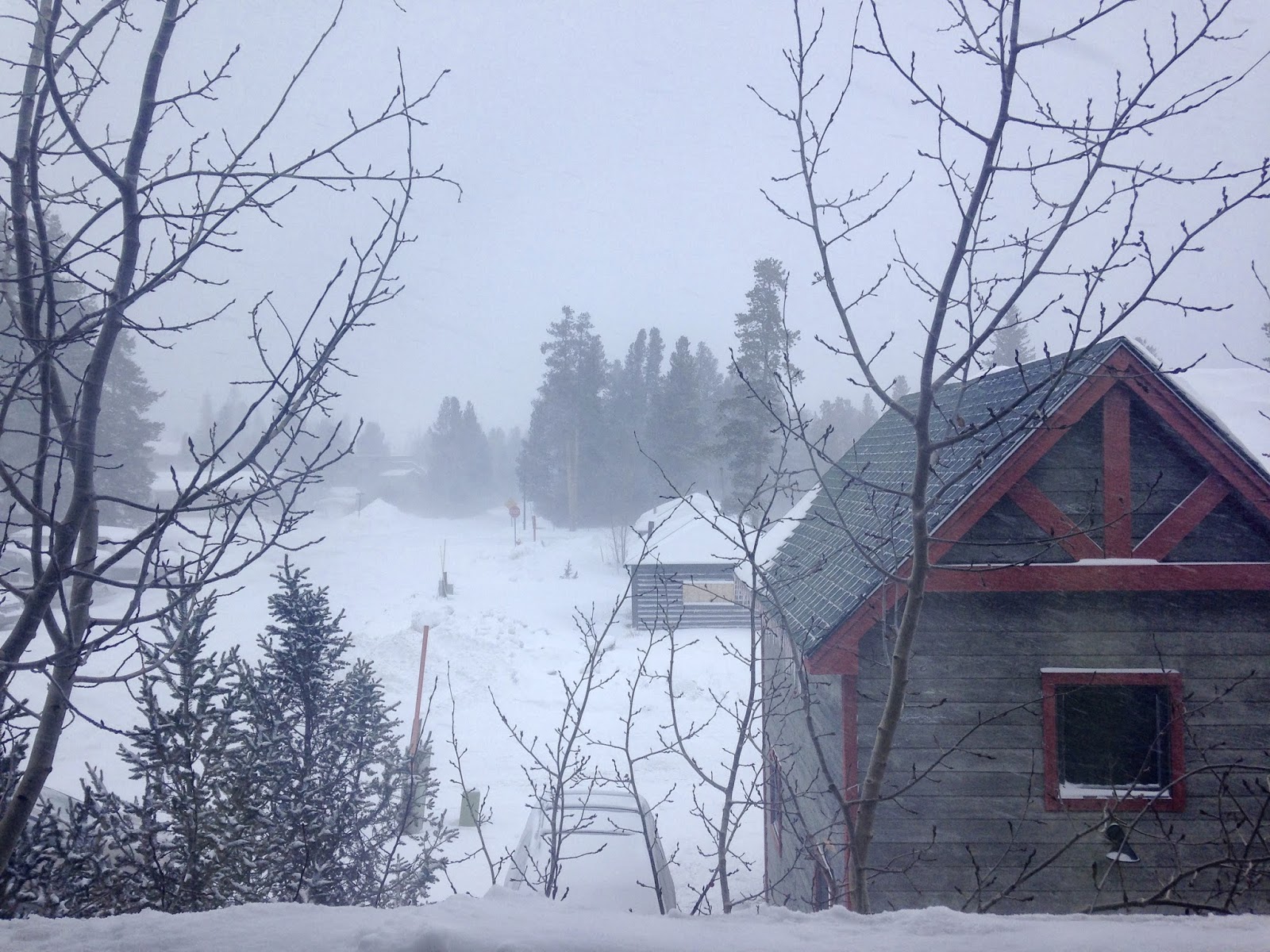 I got up 3 times last night to check on the snow.  I wanted to make sure it was still coming down… kind of like insuring that the party was still going on.   I’m a little girl when it comes to snow and still feel the rush of excitement at morning’s light to see the ground blanketed in a fresh layer of white powder.  There’s a sense of familiar and nostalgia that is coming into play with this for me, first and foremost is the possibility of a snow day that a few inches of snow might bring.  Here in Summit County, CO, snow days are virtually unheard of, namely because the plows pretty much have the roads cleaned up by first light and well, it is CO and snow is supposed to happen on a regular basis, unlike Kansas, where it still feels like a bit of a surprise.

When I was in school, a pre-dawn telephone call at our house meant we got to roll over in our beds and sleep in knowing that the day ahead was ours and ours alone.  It meant leaving on our PJ’s until lunch time and eating grilled cheese sandwiches and tomato soup in front of the TV while watching “As the World Turns” with Mom, then piling on layers of clothes and playing in the snow until our yard’s snow was all used up, our mittens were wet and our boots sloshed on the inside with snow.  Once 3:30 rolled around, the magic of a snow day was over and time returned to normal, regardless of the projects we were in the middle of because 3:30 was the end of our school day and at 3:31, we were on real time, once again.  Even with a 3:30 end, snow days were longer than any other day because they were 100% bonus and were ours to spend as we wanted, unlike Saturdays, or even weekdays, that came with the dreaded list of chores or have to’s, such as going to school.   Because my parents subscribed to the philosophy that  if it was too snowy to go to school, it was too snowy to go out (as in outside via a car), we were “stuck” at home all day, which really was a good thing as our creativity was put into play out of boredom. Empty shoe boxes were refashioned into hip homes for Barbie and her girlfriend, Midge, four pieces of furniture in the bedroom I shared with my older sister were arranged and rearranged in an effort to make a small room seem big and magazine pictures were glued onto poster board (or whatever we could find) and tacked onto the wall.  I once made a collage of only eyes, which I thought would be straight up cool.  It wasn’t.  Neither was the one with lips that followed.  Ahhh, snow day crafts.  You worked with what you had, which was always an ingredient short, it seemed.

My Dad was the high school guidance counselor and unlike today, when the school closings scroll across the bottom of the TV before you even go to bed, the phone call from the school superintendent came early in the morning.  I don’t know if that meant that Dad then had a list of people to call in a phone tree fashion, or how it was that the superintendent called him and not someone else, but that’s how it worked and honestly, I didn’t really care.  All I knew was that getting to go back to sleep for another few hours was a gift like no other and could only be appreciated during that brief roll over in a warm bed moment. There have been mornings in my life that I swear I’d empty my bank account to have that option….  a feeling like no other.

When we had a snow day, Dad had one too, which made the day even more special.  His snow day routine always started with making homemade bread, a scent that still makes me feel warm and squishy inside, and takes me right back to the deliciousness of sleeping in while life continued on around us… bread getting made, for one.

There was no early morning phone call from the school superintendent, or the smell of freshly baked bread to wake up to this morning, but I did experience the thrill of throwing open the curtains upon wakening and getting to bask in the beauty outside of my bedroom window of 6 inches of snow blanketing the ground this morning.  Pure joy. 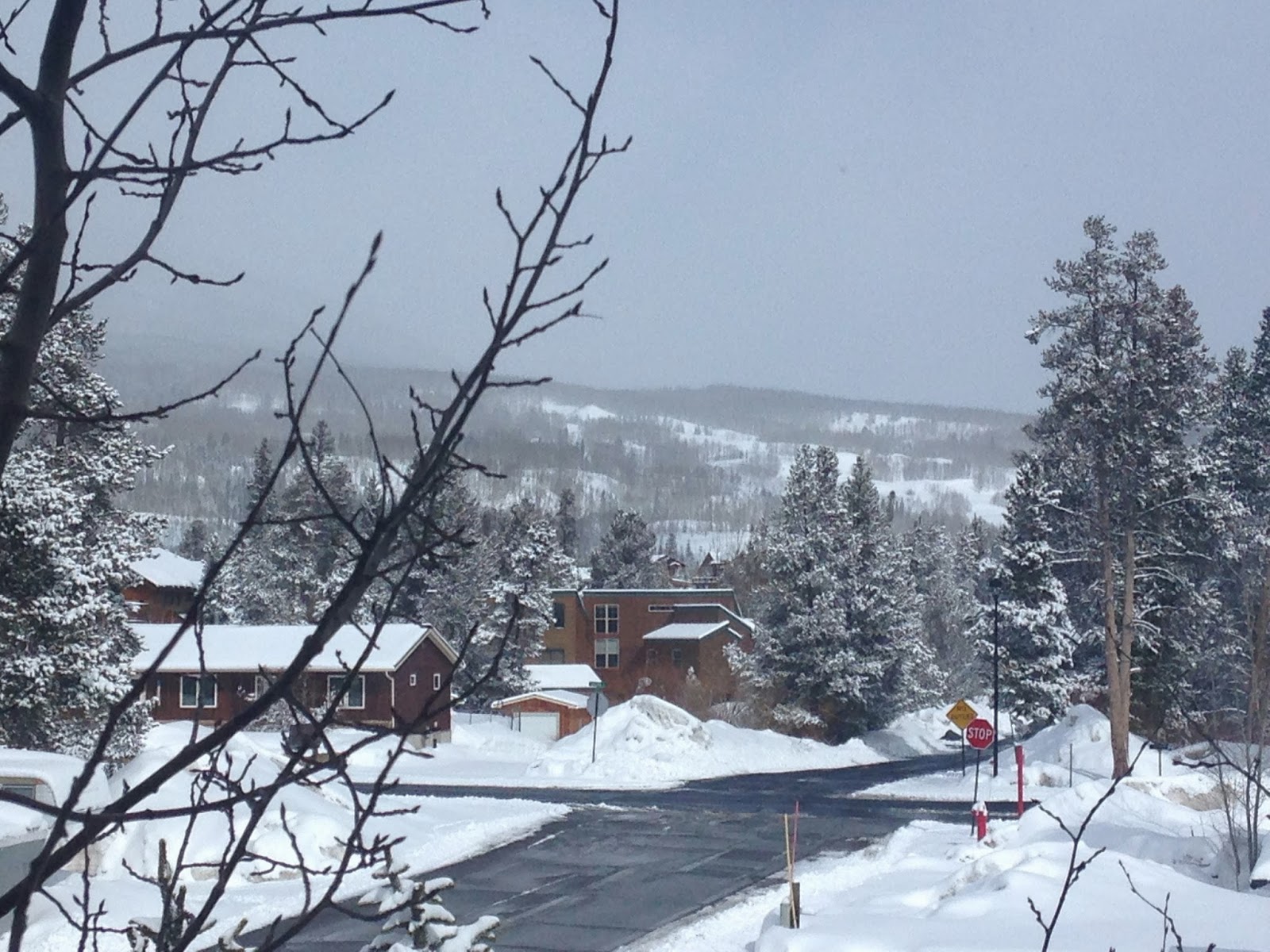 I had a pleasant surprise this morning while waiting for the Copper Mountain bus to go skiing.  A man who I had noticed earlier taking the iconic down Main Street/mountain photo with his phone, approached me and said “buenos dias,” followed quickly by a “good morning.”  I responded with a “buenos dias,” which brought on a nice conversation about the beautiful sunny day, the mountains, the blue sky and the fact that they don’t have snow in D.F., Mexico (Mexico City).  His wife then came over and he asked me if he could take MY photo.  I thought perhaps I had misunderstood the Spanish and offered to take HIS photo with his wife.  No, he assured me, he wanted my photo to show people back home, because it would be something they maybe had never seen before.  Then I realized it wasn’t just the snowy mountains he wanted in the photo, but rather an accessorized skier, from helmeted/goggled head to booted feet holding skis and poles. I was happy to oblige and as he and his wife were walking away, I called them back to get THEIR photo. 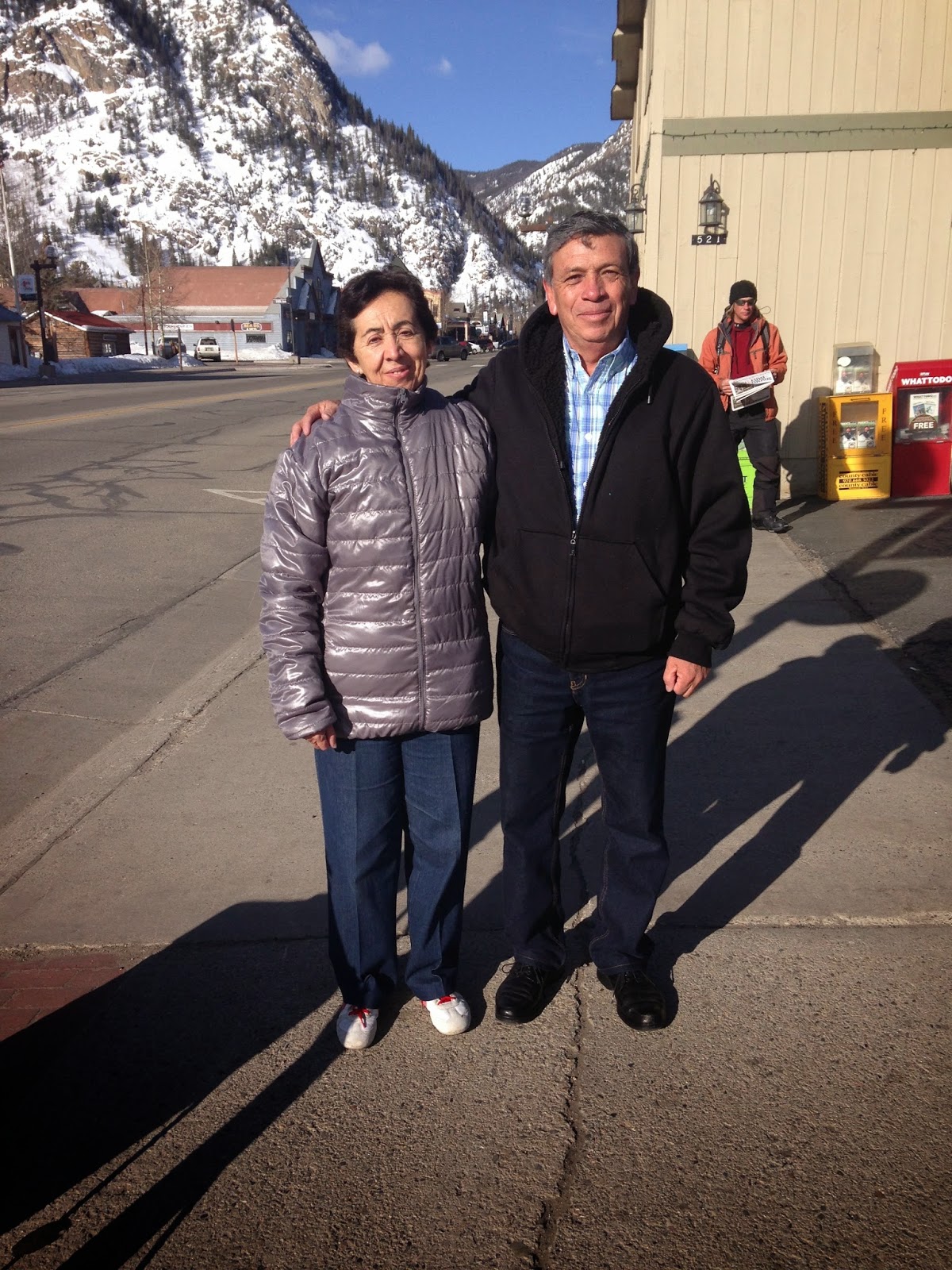 While on my ride to Copper, I realized what it was that had felt so odd to me while conversing in Spanish with this man.  I was speaking Spanish in a coat and mittens.  My Spanish has always flowed from sandaled or bare feet, and never while wearing a coat.  This was a first.  How limited my experiences had been!  I miss speaking Spanish.  I miss the wonderful feeling of throwing words together that you THINK are right, while trusting instinct on conjugations, then receiving a positive nod from the person you just rattled off to along with an answer because they understood you!  Every sentence seems to get better at that point.  I also had to wonder what in the world brought them all the way from Mexico City to this little town of Frisco, CO.   Just looking at their photo makes me smile for some reason.

My quick Spanish conversation before headed off to ski, gave me the boost in my confidence that would later be tested.  Over and over and over again.  I spent the next six hours in a private ski lesson, which had me rethinking almost everything I was doing to the point that I questioned even turning at all, parallel or not.   Tiger, my teacher, and yes, that’s his real name and he’s not in his 20’s, or 30’s or even 40’s, is a very smart man who uses a lot of physics analogies to explain to me what my skis and I are supposed to be doing, so instead of shouting commands that I’d understand like “lean forward, push your right foot down to go left, use your edges, you are amazing…”  I heard things like “centripedal force, edge angles, calculations of side cuts,  mass to the inside of your turning radius and pulling g’s… have you ever been in a small plane???”
OK, now we’re talking.  I said had I not only been in a small airplane, but I used to fly them!  Bad choice to give that information to Tiger.  From then on, all future explanations were made as if we were both sitting in the cockpit of an airplane, Tiger, clearly sitting left seat.  Although he wasn’t a pilot, he had logged enough left seat time in small planes with friends that he clearly knew what he was talking about and his comparisons to skiing did make sense… for a while… and then they didn’t.  At one point, towards the end of our 6 hour lesson, while in the lift line, he started in on the flying an airplane to skiing comparisons and asked me if I understood.  Now for those who know me, you know when my patience is gone and I’m tired, things go south quickly.  I paused a few seconds then said, “Yes, Tiger, I do understand that, but I’m not in an airplane.  I’m on skis and I’m tired.  Did I mention what a good instructor he is?  He smiled, shook his head yes and we got on the lift and headed up the mountain for a nothin’ but a fun run.  And it was.  It’s always good to end the day on a fun run that even if it was only in your head, you knew you looked good and were carving out those turns like a pro.