Skip to content
Given that it was on all of our “must see” lists,  Dee Dee, Mimi and I decided to go to Fez on our “day off.”  Morocco has a lot of holidays,  this one, their Independence Day.  The national holidays, in contrast to the religious holidays, seem to garner far less importance and when I asked my students earlier in the week how they were going to celebrate the holiday, they all responded with rather ho hum answers, most with the main theme of “do nothing.”  Deciding that leaving the day before after placement and spending the night in Fez might be more Fez than we wanted, we opted for an early morning, three hour express train.  After an enjoyable and scenic ride from our own “compartment” on the train, we were met at the station by Aziz, a guide that Khadija, our house manager, had set up for us the previous day.  All of the guide books spoke of the importance of having a guide, especially through the tangle of over 9,000 roads in the medina (or old town).  Once deep into the bowels of the medina, we understood the need and were very grateful to have someone with us who knew where they were going.

Our first stop with Aziz was the Kings palace… that would be his “other” palace, the “main” one being in Rabat.  I found out yesterday that “other” means 48…more on that later.  It was similar to the palace in Rabat… nothing simple, mosaic for miles and lots of ornate brass.  It feels rather disrespectful to say once you’ve seen one Moroccan palace, you’ve seen them all, but I will say it anyway.  It felt uncomfortable for me to see such an excessive display of grandeur and wealth in a 3rd world country.  Most of the front of the palace is done in zillij tile, or a type of mosaic, which is an old technique used by skilled artisans who hand cut and glaze each and every tile then lay them in intricate geometric patterns.  It really is quite impressive, especially when seen in such massive fields.

The bigger interest for us was the medina and the labyrinth of streets and maze of markets or souqs.  Once inside the medina, it felt as if we were walking deeper and deeper into a civilization that isn’t seen at all from the outside.  There are no cars allowed inside, which became clear as we got deeper and deeper into the bowels of this ancient, walled city, that was built in the early 700’s.  The streets seemed to narrow the farther in we went, with some of them so narrow that I couldn’t even stretch my arms out completely while touching both walls.  As we zigged and zagged down the narrow pathways, I asked Aziz how anyone would give directions to their house to an outsider?  He said that everyone knows where everyone lives inside of the medina and that even though he also lived there, he still gets lost on occasion.  I can’t imagine how frightening it would be to be lost in the maze, especially at night, as the only natural light that was coming in was from the narrow openings where the tops of buildings didn’t quite meet.  There is electricity, but I’m guessing it’s pretty dark in there at night.  Before we went in, Aziz did ask if any of us suffered from claustrophobia.  I’m guessing if one of had said yes, we would have turned around and gone back to the King’s palace.  This was no place for anyone who suffers from a fear of small places! 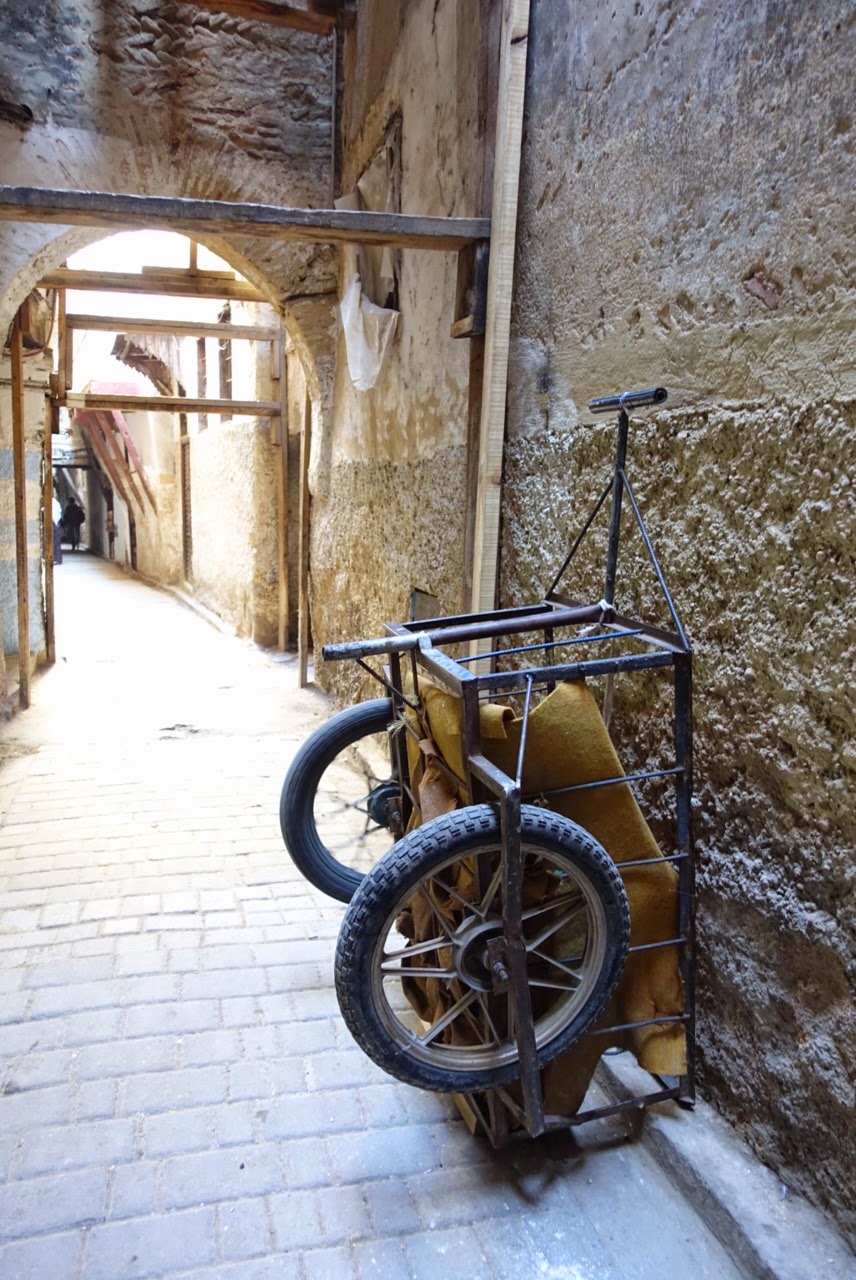 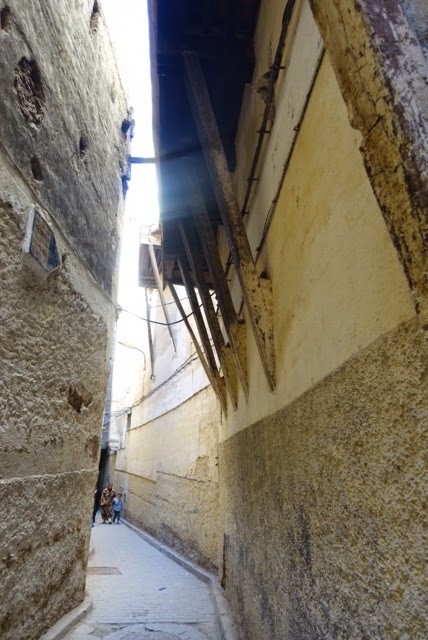 Aziz told us that the medina in Fez is the oldest in Morocco and within its walls is the oldest university in the world.  Surprisingly, the original plumbing is still in use, which was really hard to wrap my head around.  Over 10,000 people live in the medina and their houses all have simple, understated doors that line the narrow streets and pathways.  Moroccans believe that large, ornate doors that would portray wealth, are bad luck and it is better to have a modest, very simple door, regardless of what’s behind it.  The palaces it would seem are the obvious exception to this belief.   Most had small hand knockers on them, one placed at a “normal” height for people walking and the other placed higher for those seated on mules.

Lunch was at a place that Aziz recommended for us, with assurance that we’d really like it after we told him we were growing tired of tagine  (a type of Moroccan stew) and was there a restaurant that sold anything else??  Without answering our question, he then added that it was really clean.  Our confidence to eat outside of the traditional faded on that one.  The menu had 8 different meal options, all with the same salad and dessert and different entree options,  well, I say different, but all but one were variations on the tagine theme,  and the non-tagine dish was couscous.  After almost 3 weeks of having some sort of tagine at least once a day, our stomachs longed for bland, white food.  Mashed potatoes and macaroni and cheese with ginger tea to drink would have been nice.  My stomach had started giving me the 3rd world nudge the day before so I was exercising caution, not an easy task in this spice loving country.  With little enthusiasm, we ate what we could and did a lot of moving food around on the plate to look like we had at least tried.

Here’s a piece of advice for anyone traveling to Fez… don’t eat lunch, most likely a spicy lunch,  then go to the tannery.  It’s not a good fit.  Tanneries, if you’ve never been to one, smell like a combination of rotting flesh and vomit.  It’s not pleasant.  That’s the bad news.  The good news is you’re handed a big handful of mint to bury your nose in while you make your way through  and by the end, at seeing all of the beautiful leather, at least for me, the visual overcame the stench. Hands down.

From leather tanning to weaving… the traditional Berber scarfs are made in part from the silk from inside the agave plant.  The weaving, all by hand, was a very interesting process to watch.  At this point, however, I realized that our pal Aziz has directed us to “specialty shops” where he shares a bit of the profit of anything sold to us.  It would explain why when I stopped to look at one of the smaller “booths” for a scarf, he told me to wait, that he had a place that would give me a much better price.  I guess I could have been annoyed, but it’s good business for the guides, who are a necessity, and if they can make a little extra on top of the little bit he was charging us, then why not.? The sales style in Morocco is NOT aggressive.  It’s a very comfortable place to shop.  Once in a shop, there is a little more salesmanship, especially once the bartering starts (a custom that is as much of a game as much as anything else and one that Moroccans really enjoy, in fact I’m told that prices are doubled so the bartering is a necessary part of the shopping experience).  I never once felt like there was any aggression directed towards me to shop in one place or another with shouts of prices and deals, which was very refreshing.

I think I would have enjoyed a few more hours wandering in and out of the many markets, but 3rd world stomach had caught up to the 3 of us, and we were souk’d out and called it a day after about 4 hours.  The highlight for me was getting to experience a living city along the same lines as it has done for a thousand years.  The endless confusion of lanes with various shops, homes and mosques felt very exotic to me.  Very Morocco.
Our journey home was quite a bit different from the nice quiet train ride we had in the morning.  By accident that morning, we bought one way tickets, which of course weren’t accepted at the gate,  so we had to make a quick scramble to purchase tickets and given that it was a holiday, the train was very busy and since we got on last minute,  we felt lucky to find seats at all let alone ones that were close to one other.  At almost 30 minutes past the departure time, while we were still sitting, a very agitated, very angry man got on our car and started yelling as he was walking through the train car.  I didn’t think a whole lot about it until I heard…
“All people who speak English need to GET OFF THIS TRAIN!!!!”
Which was followed by a lot of Arabic, which I could not understand, but the English, laced with quite a bit of profanity that I will spare you,  I understood.  Clearly.
For the first time during my stay in Morocco, I truly felt afraid, especially given that it looked like we were the only “English speakers/Americans” riding on that car.  The yelling continued, with some around us looking confused, while others simply ignored him and couldn’t be bothered to look up from their newspapers.  The conductor came over and said something to the man, which only escalated his anger, eventually leading to him getting off the train and moving the scene to the train platform.  We had no idea what was going on and no one to ask, given that everyone was speaking Arabic.  The train, now 40 minutes late, started up and all the women on our car then began to pound their open palms on the windows, perhaps to get the conductor’s attention, but I really have no idea, and why just the women?  And what did they want?  It was all very surreal… scarfed women hitting the train windows while the yelling and screaming continued on the platform.  To be in a situation like this and not understand what’s going on because you don’t understand the language is really frightening.  Fortunately, a few minutes later,  a young man who we had met on the train that morning and had spent quite a bit of time talking to, got on and sat in an open seat right in front of me.  He witnessed enough of the yelling that he was able to tell us what was gong on.  The man was simply voicing his anger at the trains delay, something that sounds like it happens quite a bit.  Something that ended up being an irate passenger voicing his opinion about a 40 minute delay, with a heads up to the “English speakers” who may not know about the trains frequent tardiness, looked a whole lot different to us given that we couldn’t understand what was being said. When you hear “English speakers” and “GET OFF THE TRAIN,” followed by a whole lot of profanity, it’s easy for your mind to go places out of fear. After all, the world has become a different place post 9/11.  Thankfully, I was wrong, but how sad that because of what’s going on in the world today, my mind went there initially.

A fun day in Fez…
and that’s what I told my students the next day when they jokingly asked me if I did anything to celebrate Moroccan Independence Day.  They didn’t do anything.