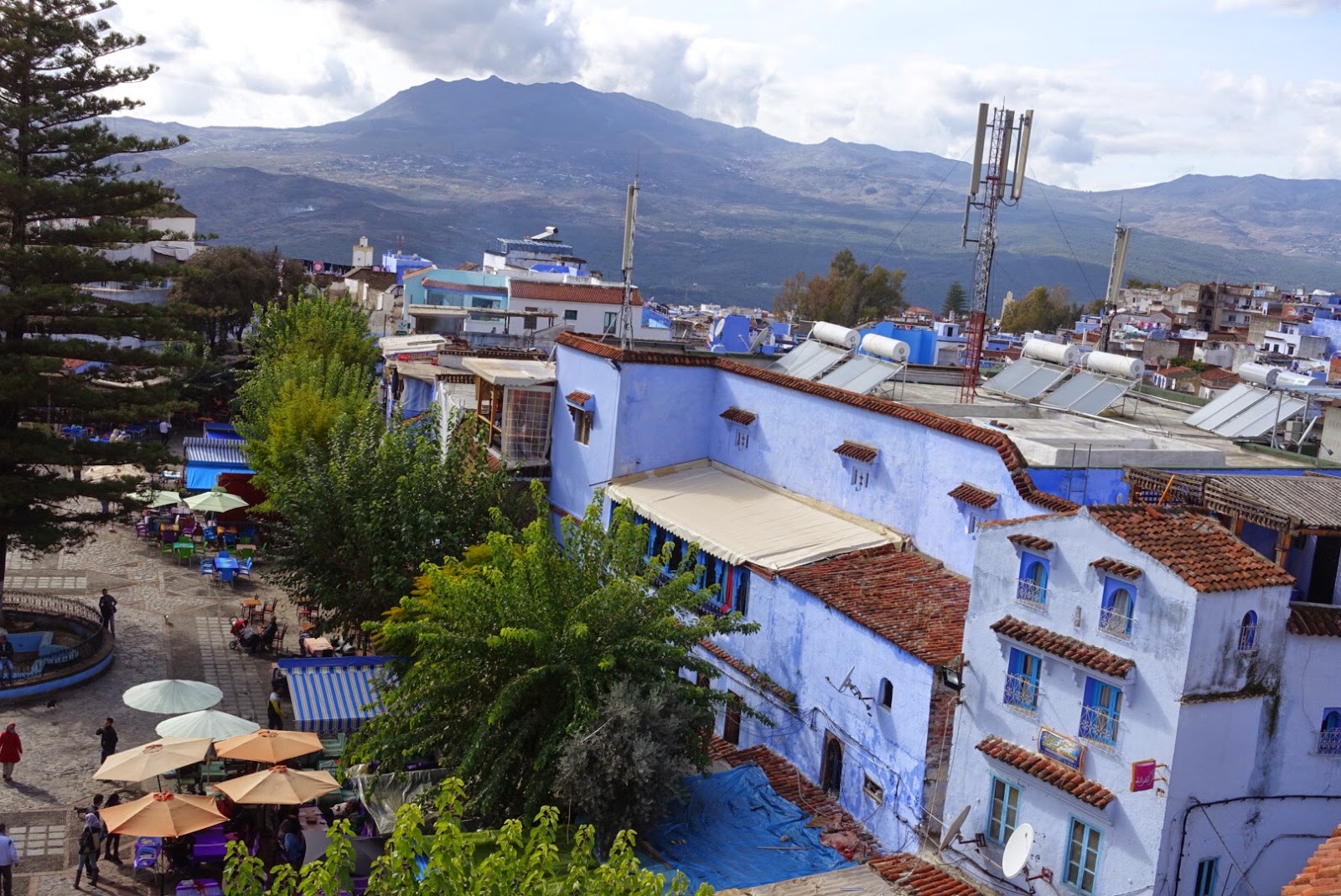 It’s not always the most obvious memory that comes to mind when recalling an adventure, but rather the funny, odd one that comes to mind.  No doubt when I think back on my weekend in Chefchouan, Morocco, I will think of the beautiful blue and whitewashed buildings that were nestled in between peaks of the Riff Mountains, but high in the queue on memories will be our entrance into town.  It was raining, and dark when the bus pulled into the station and the lack of taxis waiting at the ready, gave us all concern as we had no idea where we were going.  Three of the girls were going to a hostile and Mimi, Dee Dee and I had a reservation at a hotel, which just happened to not be near the bus stations, near being a relative term as the town is small (30,000 and change).  I grabbed the first (and one of the only), drivers I saw and claimed him as ours but wires got crossed and the girls traveling with us, but who weren’t t staying at the same place, joined up with us as we were pouring
ourselves into the tiny van, luggage and all.  The driver, upon seeing 6 of us rather than the 3 he hadanticipated, said something, in a not so happy voice,  that of course none of us understood as it was in Arabic.  I’m sure it had something to do with “bait and switch.” Figuring he might be able to make some more money out of the whole deal, he agreed but suggested with gestures, that one of us sit in the very back with the luggage ( it was a very small van… a “vanette”, if you will, that barely could accommodate 5, let alone the 7 we had just mashed in).  Kelsey took one for the team and crawled into the very back with our bags.  The driver had a hard time getting the vehicle started, (I think what he was trying to do was pop the clutch…think “Little Miss Sunshine” car scenes here…) but was unsuccessful. Being on a hill going up was only adding to his problems.  He finally asked us all to get out, which we did, and while standing in the cold rain, watching the taxi roll farther and farther down the hill, someone asked where Kelsey was… it was then that we realized she was still crammed into the back of the van, that was now rolling faster and faster down the steep hill.  Eventually, he stopped, pulled up the parking break and deeming the situation as hopeless, got out of the cab at which time we ran down the hill to the car to rescue Kelsey.  She seemed no worse for the wear, but did say she prayed more during her “ride” than she had in a long time.  Fortunately, another cab came by and the hostel girls grabbed it and our driver, willing to give it another go, motioned for us to get back in for another try.  The extra weight must have been the cause of the problem because once the 3 of us were back in, the driver had no problem getting the car started and up the hill.
Not even a block from our start, the driver motioned to the curtains in the back, and thinking he wanted to insure the best view possible of this charming city, I pulled them back all the way.  He responded abruptly with a “No!” and gestured to me to close them… something that a man who he picked up during all the chaos and who was now riding with us in the front seat, translated his driver friend’s words to broken English that said something about the police and the law and he could only
have two passengers in the back seat.  OK,  so I promptly closed the curtains and wondered what explanation he would have had for the police when there were FIVE of us in the back a seat and onewith the luggage!
Once at our hotel, there seemed to be a problem with the payment as the “friend” was insisting on payment in Euros while the driver was quoting prices in dirhams (the currency of Morocco).  After about the fifth time of telling him we didn’t have Euros (a likely assumption given the proximity to Spain), he old me 20 dirhams a piece (about $7 each), which was sky high.  I gave him 20dh and he shook his head no, so reluctantly, I gave him another 20 dirhams and he then nodded yes and promptly gave me the first 20 back, which put us back to square one and the number I had argued for in the first place, 20dh for all 3.  Welcome to Chefchouan. 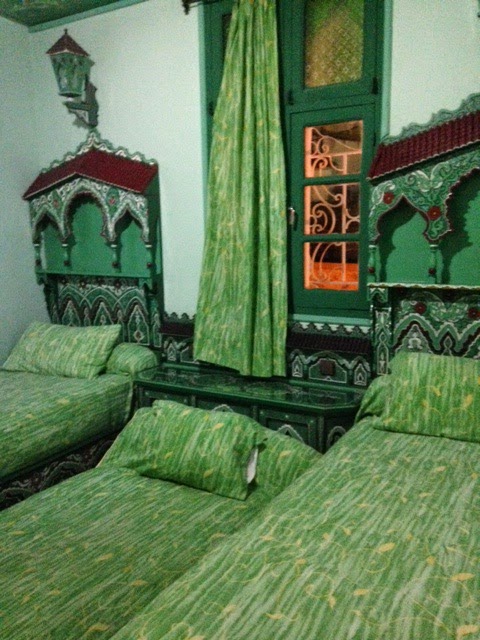 Our very green, very ornate room…No problem if you have 3, as there is plenty of room, said the website. The 3rd bed (mine), was a mattress on the floor between the two beds.  No complaints though, as it was far more comfortable than the bunk bed I’ve been sleeping in!  Besides, I’m in this for a cultural experience, not to re-experience what I’m already familiar with.  And new and different it was! 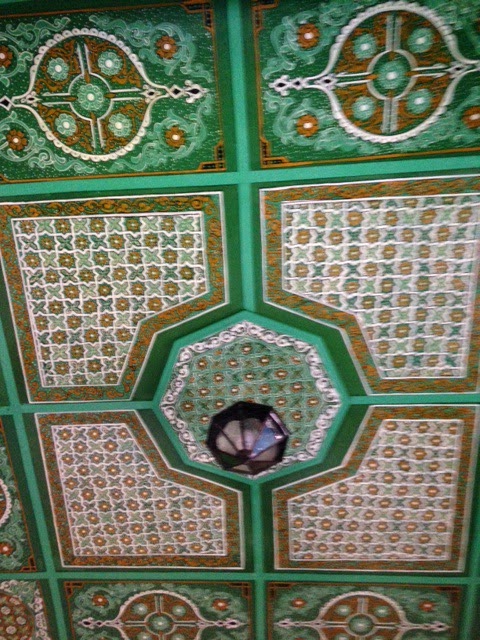 The very elaborate, and hand painted,  albeit slightly crookedly, ceiling.  As good a view as the TV ( which was Arabic with French subtitles and most of it coming out of the Middle East. 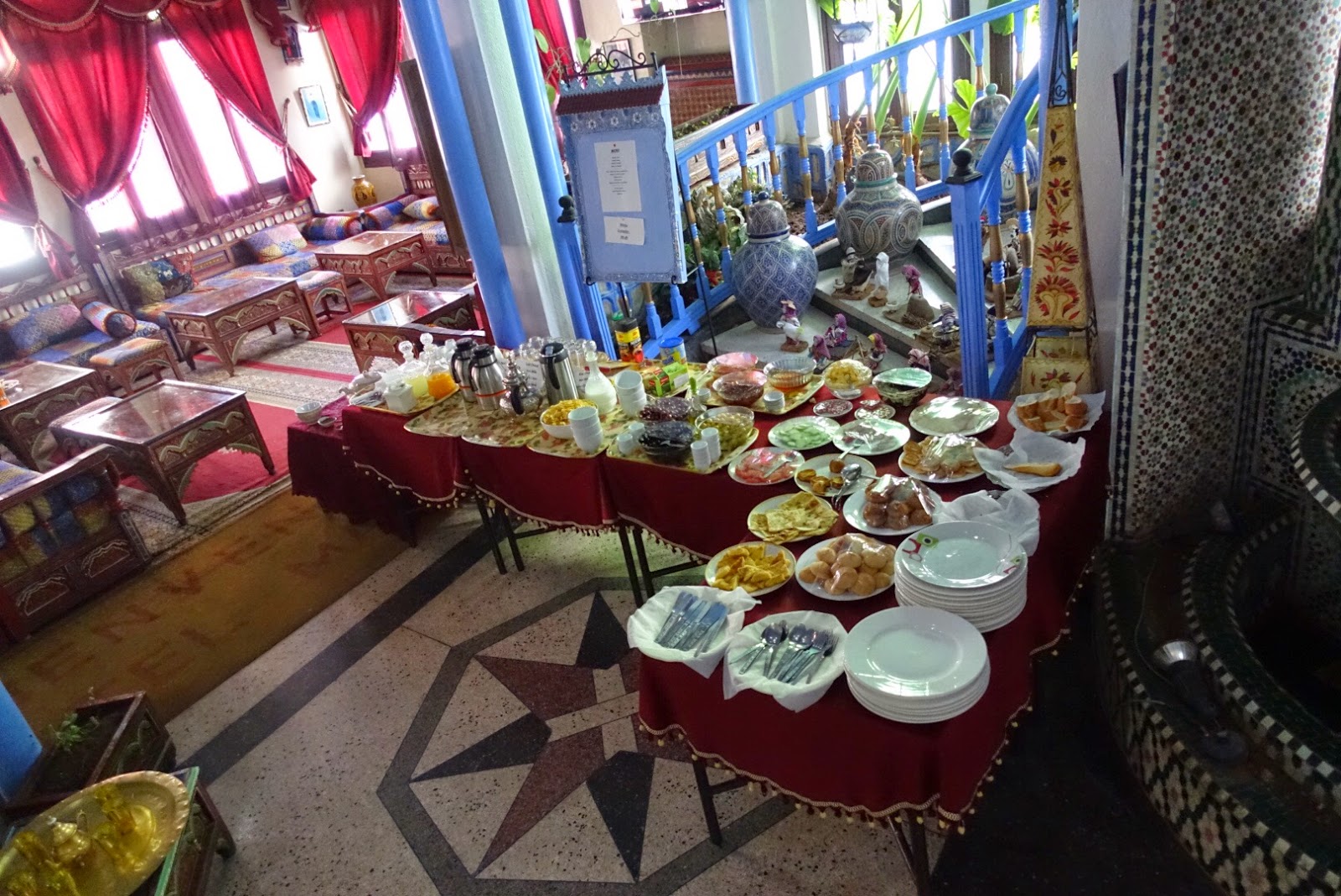 Breakfast included…ala Morrocan style… So many selections but few that weren’t their diet mainstay….bread…
After getting ourselves comfortable in the small room, we headed out for dinner. Now had we gotten past charming and blue and whitewashed on our research, we would have learned that Chefchouan is basically a dry town.  It took asking three people where we could get a glass of wine, before we had an answer, along with directions.  Although Chefchouan may be an “almost” dry town, there is no shortage of kief, or hashish, which is a largely grown crop in the area around Chefchouan.  Although illegal,  it didn’t  sound like the laws are enforced.  We had all been given forewarning on this, both from Mohamed and for me, my students.  Everyone wanted us to understand that there was a strong likelihood that we’d be approached to buy, but that didn’t happen, although the scent was ever present, especially in the market, where the venders were hardly trying to hide it. It does explain the more laid back,  backpacker type of culture that seemed to flood the town, mostly from Spain.
So we followed our insider’s directions and made our way down to the one and only local bar, ironically only a few doors down from our hotel.  I was relieved to be able to dip into what felt like my mother tongue of Spanish and understand the directions and actually have a brief conversation with our directions man, something I’ve missed terribly these past few weeks and why typing this blog feels a bit like a big gulp of oxygen for me right now.  Spanish is  common in Chefchouen due to  its close proximity to Spain.  We had to make it past the bouncer to get into the bar, who basically needed to know what we would  be drinking.  Beer?  He seemed OK with wine and let us in.
Once in,  we noticed that it was all men… all men and a whole lot of cigarette smoke.  A very kind middle-aged man,  who was seated at the table next to us and who I thought was a customer, quickly got up and came over to take our order when he saw us.  He was very excited about our choice, which was his suggestion, of a Morrocan red wine,  After a bit of a wait, he  brought the wine over with sincere apologies for the glasses, as one was a slanted rimmed brandy snifter and the other a very small, I’m talking a few tablespoons small, glass that I’m guessing was for aperitifs.  The drinks were followed by plate after plate of food….rice flavored with red and green peppers, a  plate of Moroccan salad (peppers, onions, cucumbers and tomatoes, all finely chopped) and a fish dish that we were all reluctant to try as even smelling it was a bit unpleasant.   We told him we weren’t staying for dinner but he kept saying, “no problem, free…” and would bring more!  When the plate filled with fried sardines arrived,  I had to lie and tell him that we didn’t eat fish.  He was so gracious that I didn’t want to hurt his feelings by not eating them.
And then I finally  had to ask about the elephant in the room…(or shall we call it a camel…)
“Why are we the only women here?”
“Well, Moroccan women aren’t allowed inside because they…well …they cause trouble with the men and the men have trouble with them.”
Given what I’ve learned about Morrocan society, its  treatment of women and the illegal trouble these women often find themselves in (ie pregnant without a father willing to take responsibility), and then of course the babies and children that I’ve been with the past few days at the orphanage, his answer hit me a little harder than I had anticipated.  No Morrocan women, no trouble, which explains why we were let in so graciously.  We were a bit of a spectical though, which was both kind of enjoyable along with a little bit creepy.  But our waiter was so charming that but we  ended up returning the following night, but this time our waiter was ready and had dug up two glasses of the same size that although not intended for wine, we were touched by his efforts in trying to get it right for us!
We spent the bulk of Saturday walking around this beautiful,town, with plenty of time spent bartering in the medina, and ending up with a few nice treasures.  There was a hike up to a Spanish mosque that we had talked about but by mid afternoon, none of us felt all that great and we opted for naps in our tiny, green, ornately decorated and stinky room.  Living in such close quarters with everyone sick, has finally caught up to me and I’m afraid I am following suit.  We took an early 4 hour bus ride home and all of us have spent the day in various degrees of rest. I did  wander out into the adjoining neighborhood for  a bit this afternoon on my own, which felt good, although I didn’t  have the energy to venture far.  I’ve got a short week left, with a national holiday on Tuesday, so hopefully will be able to knock this thing off before it gets too bad.  Emergen-c’s and zinc are in short supply around here and can  fetch a pretty good bartering price!  No doubt an early to bed night for everyone tonite. 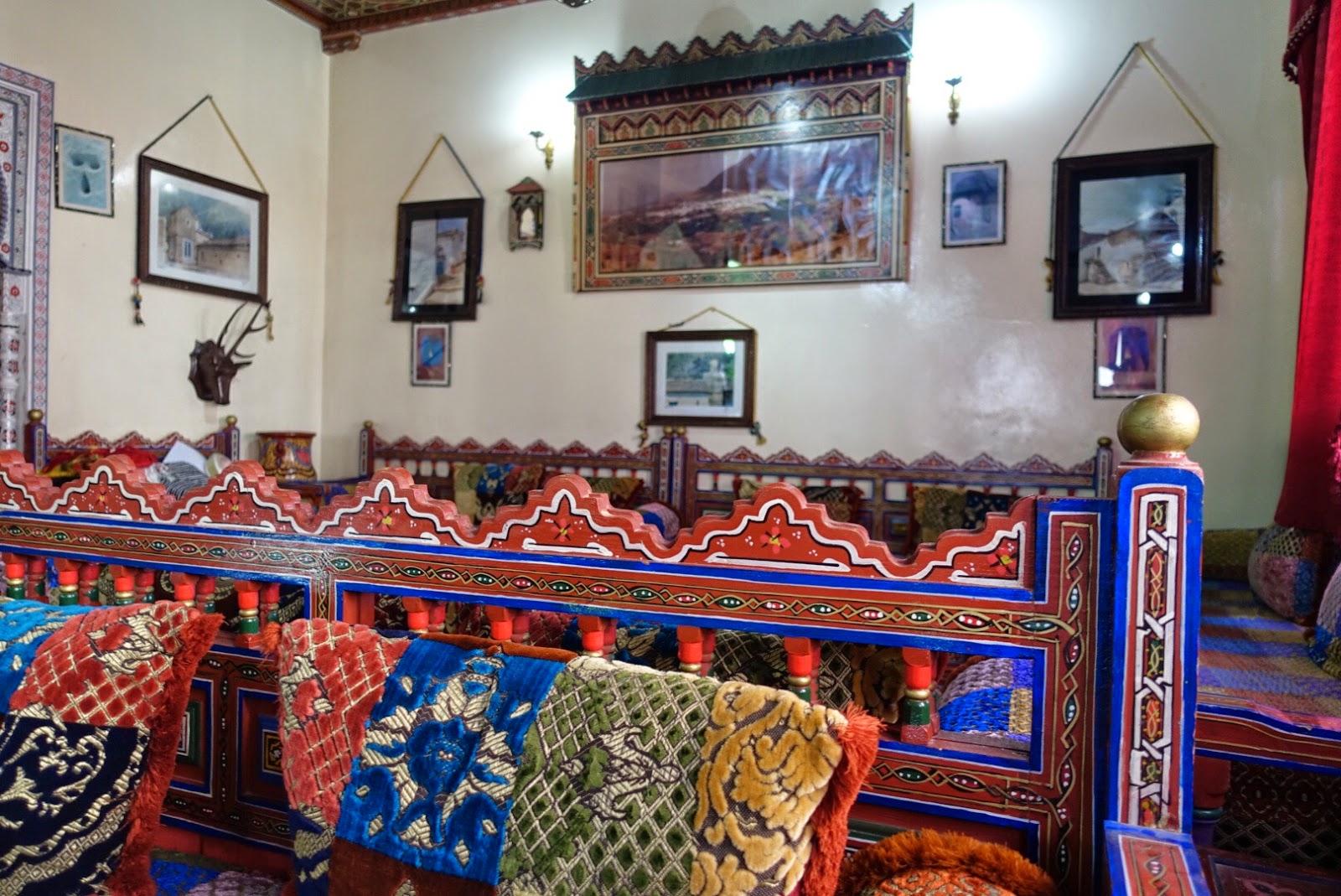 Nothing, but nothing  in the Moroccan culture is simple… this photo is of  the lobby and dining area of our hotel (people use the many coffee tables as dining tables, the same as we do at the volunteer house) 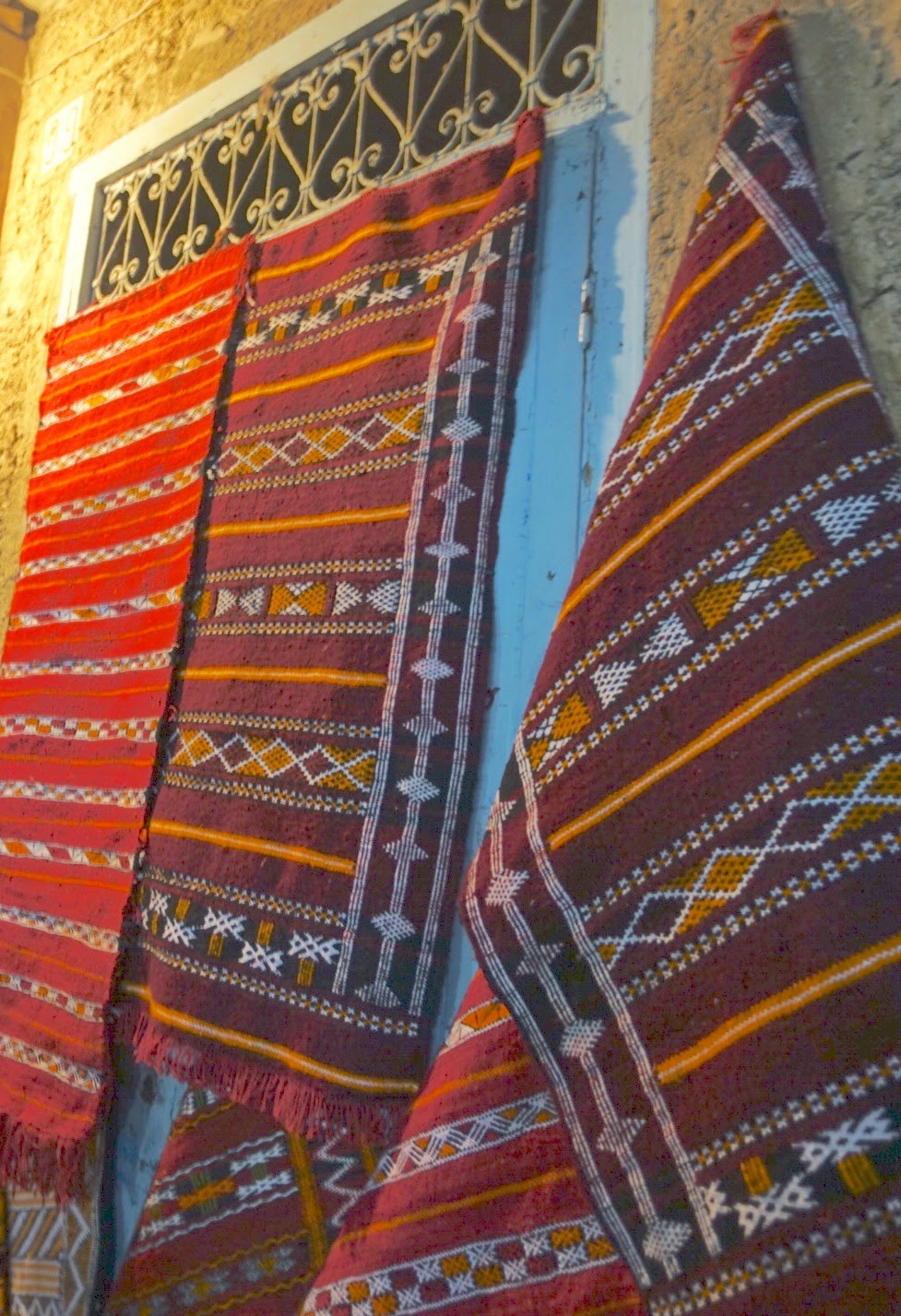 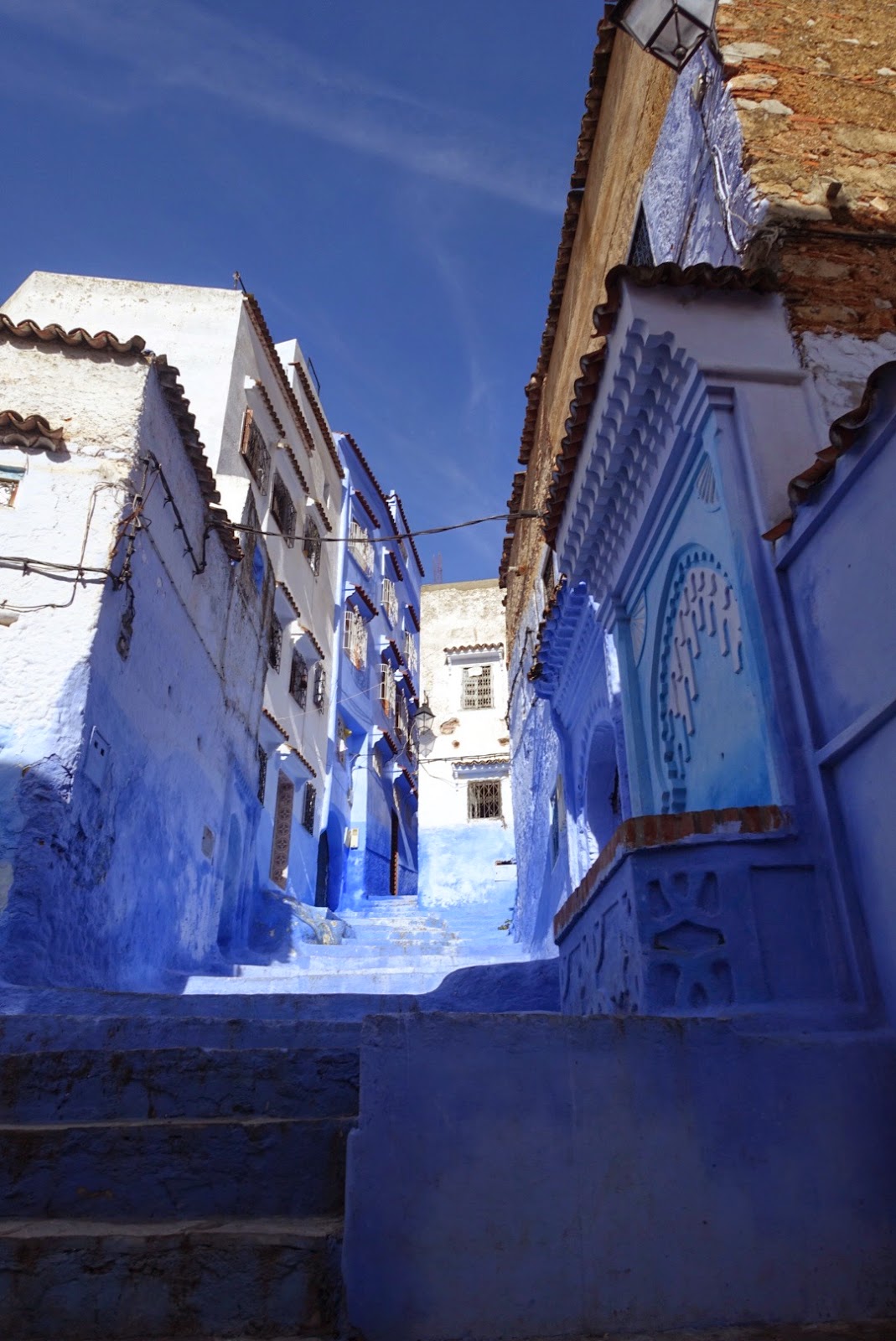