Blogging has not been easy due to spotty internet so I’ve been a bit remiss on my postings, but while I’ve got decent internet (that will end when the hotel fills up with Pilgrims), I wanted to share a few stories I heard on the Camino today.

Today was day 6 on the Camino and with each mile, about 90 so far, there seems to be a new story.  I was especially touched by the ones I heard from a Canadian woman, ironically named Laurie.  She and four of her friends, now known as “the Chicas” have been planning their Camino trip for the past 2 years.  They’ll be going to the end at Santiago, a 4 to 5 week journey.  I noticed that she had
laminated cards attached to her pack, about the size of a playing card.  I noticed one of them had a photo of 4 young men and had to ask.  They were her 4 sons, none of them who live close to her.
Before she left, she asked each one of them what they would whisper to her if they could while she was on her journey.  She wrote down each one of their responses and in addition to the card that had their photo, she carried their words with her.  She told me to go ahead and read it aloud if I wanted, especially paying attention to the 3rd one as it was her son who had given her the most emotional support.

“Stop, look around and appreciate where you are.  I love you and I have more confidence in you completing your journey than anyone else on earth.”

I couldn’t complete the words without crying.  There is such an openness and vulnerability that seems
to be present on the Camino and I think that’s why so many of these people, who I’ve really spent
very little time with, I will carry with me long after I’ve left Spain.  We’re on a first name, home state or country basis with so many, and though connections are made, there’s little exchange of information (ie facebook) so it is all in and of the moment.  It is very powerful and very real.  We were asked today by a group if we knew who Dan from Boston as he had left a book behind and one of the other guys had it.  I knew right off who they were talking about and had met him on the first day.  There’s Jerry from Indiana, Dan from Hawaii, the Canadians (5 chicas), the French couple, the Brazilian guy, the Dutch quartet, and so on.   I’m learning to appreciate the moments spent with a variety of people from all over the world, some speaking English, some Spanish and others, communicating simply with a “Buen Camino.”  The mother son duo we met on day 2, saw again on day 3, we’ve not seen since and that makes me sad as I don’t even have a last name for them, but that’s the lesson on the Camino, that of impermanence and treasuring the moment

Laurie, from Canada, also told me a story that she referred to as “heaven on earth.”  She said her aunt who she was very close to had recently died.  She loved red wine and red roses.  We spent a lot of
time today walking through the rioja wine vineyards and she told us that earlier she had seen one lone
red rose amongst the rows and rows of grapes.  I’m not sure that would have been noticed otherwise, but while on such long stretches of walking alone or in and out of a group, you begin to see with all of your senses.  I shared her story with a couple we had met earlier in the week and had shared some beers with, and they said they also saw the rose.  As we’ve gotten deeper into the Camino, we also seem to be getting deeper into ourselves.

I also heard the story today about an American who had started the Camino last year, but during the climb through the Pyrenees (day one), had fallen and broken her ankle.  She was taken to the nearest town, Roncesvalles, where they cast it and when she was able, she flew home where she had extensive surgery followed by months of physical therapy.  She came back this year to start the
Camino all over again, Pyrenees Mountains and all, and had gotten to know the Candians along the way.  You’ve got to admire such dedication.  I’m not sure I’d have the same enthusiasm.
It was a good day today on the heels of probably one of the worst days on the Camino (due to both
the route and the final destination).  Most of our day was spent walking through vineyards.  Even though we were rained on, had bouts of wind and a lot of climbing, I do think it was the best time I’ve had on the Camino yet.

One of the biggest treats today was a little stand set up in the middle of what seemed like nowhere, where a couple was “selling” (by donation only) fruit, cookies, and drinks while another woman sat nearby and provided accordion music.  Eating a nectarine in the middle of a field with accordion music in the background was pure heaven.  It was the simple things today that really counted. 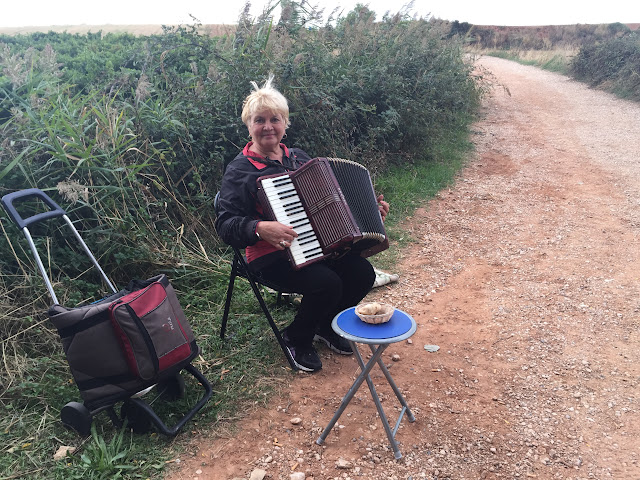 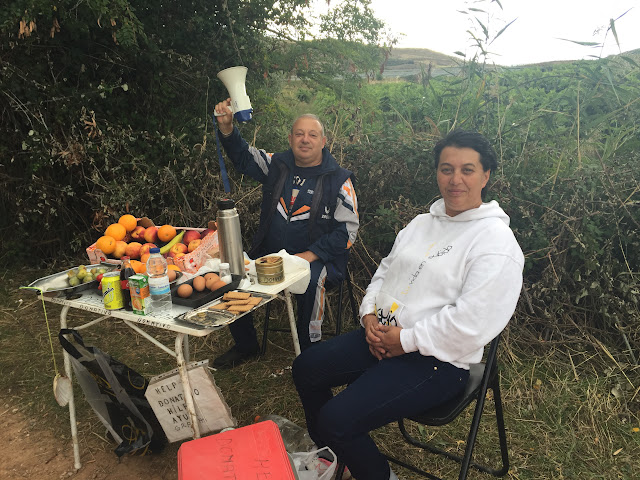 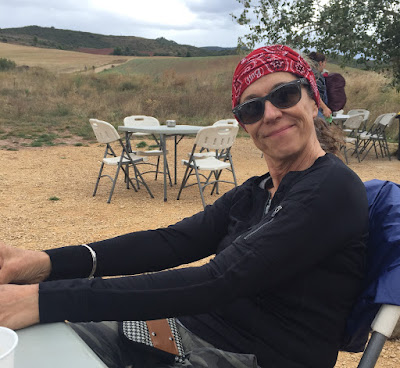 Stopping for a café con leche… Yeah.  This is good.