Last Friday, I spent my morning working at the children’s orphanage because the women’s center where I’m teaching English is closed on Fridays.  The first thing I have to say is that I’m grateful for the placement I got, as working at the orphanage this morning was very difficult for me. The room I worked in was large, bright and very clean and had probably 10 or so cribs and a large play pen in the center of the room where two of the bigger boys were situated. Initially, I assumed that the children were toddlers, maybe the oldest 5 or 6, but once I started feeding them I saw that they all had their permanent teeth (they were all fed some sort of formula but the bigger two in the playpen, who were spoon-fed milk soaked bread.   I later learned that most were in the pre-teen to young teenagers, although there were a few that even the workers knew exactly how old they were.  I must admit to being a bit surprised when I saw pubic hair on one of the girl’s whose diaper was being changed next to where I was.  That told me a lot regarding their age.  Their tiny bodies were contorted, and their limbs bone thin and when I picked a few of them up to move them, they were hard to carry as their bodies didn’t conform to mine as I was used to, but rather, were stiff and unyielding.  I was also terribly afraid I would hurt them so was being overly cautious.

Illegitimate children in Morocco are considered outcasts, non-people or bastards and given that unmarried sex is illegal in Muslim countries, the stakes are very high for a woman who finds herself pregnant without a father that is willing to marry her and accept in the responsibilities.  There doesn’t seem to be any kind of repercussion towards the man who gets the woman pregnant, but rather, it is entirely the burdon for the woman to carry.  Although recent legal reform says that an unmarried woman may register her child to make them available for social programs, with the fathers concent or not, this is not a law that seems to be followed and women still seem to be paying the price.  This is why so many children end up in orphanages as they are literally the babies who are “thrown away” by the mother to protect herself.

The children at this orphanage are totally dependent upon others for their care and from what I saw,
couldn’t do anything on their own short of cry to indicate distress.  During my time there,  I was able
to go up to the 3rd floor where the youngest babies reside.  They were absolutely adorable and most of them looked healthy and would be considered “adoptable.”  The adoption standards are rigid though, as only a Muslim can adopt a baby in Morocco and even though they may bring them up as they choose (in a Muslim family), they must promise to keep the baby’s given Arabic name.  The whole process can take years and there’s a reluctancy to adopt to families living outside of Morocco, even if they are Moroccan.  The children with physical limitations, like the ones I was working with, aren’t considered adoptable and even if there was someone who wanted to adopt them, the orphanage is reluctant, fearing that the families would not be able to handle the burden and would leave the child once again.

Initially, I wasn’t sure what my role was going to be once all of the kids had been fed (they were
bathed and in clean clothes before we arrived), but it didn’t take long to realize that once their bellies were full, all these kids wanted was some attention and physical touch.  A simple caress of a cheek
with gentle words or singing was enough to calm them down and more than once, I was able to get a
few smiles or a hand that would reach through the crib bars to touch me.  I had to keep reminding myself that they weren’t toddlers, but rather were children, due to the fact that they fit in a normal
sized crib.  There was one girl who tugged at my heart and who I spent most of my time with. She had beautiful brown curls and huge brown eyes and was so contorted that her little body barely took up half of the space in the crib.  She was wearing a child-sized, red “ROCK THE BAND” tee shirt that made mention of a music festival in Buffalo, NY.   My reaction vascilated between sad as it seemed to make her appear even more vulnerable than she already was, and happy, simply because of the irony of it.  That being said, I did tell her several times that she rocked the shirt and for some reason, that became a connecting thread for us, even though she of course had no idea what I was
saying.  My tone, however, I’m sure she understood.

As much as I’ve enjoyed learning about the history of Morocco and the traditions of its people,
(Muslim lessons will begin later this week), I’m finding that I learn so much about a culture through
observation of how their most vulnerable are treated.  I saw this at Mother Theresa’s in Perú and
again at the orphanage in Rabat.  Because of medical issues, which I’m sure are a result of poor
prenatal care coupled with difficult births, most likely without medical assistance, most of these children will have a very shortened life span.  It was so touching  to see the women at the orphanage work tirelessly and with such love to insure that these children are given the best life possible.  All of their cribs were made up with colorful bedding and had at least one stuffed animal propped up where it was visible to the child.  The clothes they had on were clean and gender specific (which was a good thing as I was having a hard time with a few of them determining if they were boys or girls).  I was deeply touched by the love I saw in that room.  When I went upstairs to peek in the babies room, I had to wonder about the ones that may not ever get adopted and will end up spending their entire life
in  the orphanage and what they could become if raised in the protective embrace of a loving family.  The staff does the best it  can, but there are not enough employees or volunteers to give
these children the attention and the touch that they are so hungry for.

Given the time I’ve had to process this initial visit, no doubt my time this Friday at the orphanage will be a bit easier, but that’s not to say that it won’t come with a tear or two.  Gratitude.  For so much.  I
can’t begin to express….

There are no photos allowed inside the orphanage to protect the children, but I did get a photo of me ouside of the building, complete with the jacket they like us to wear to protect our clothing. 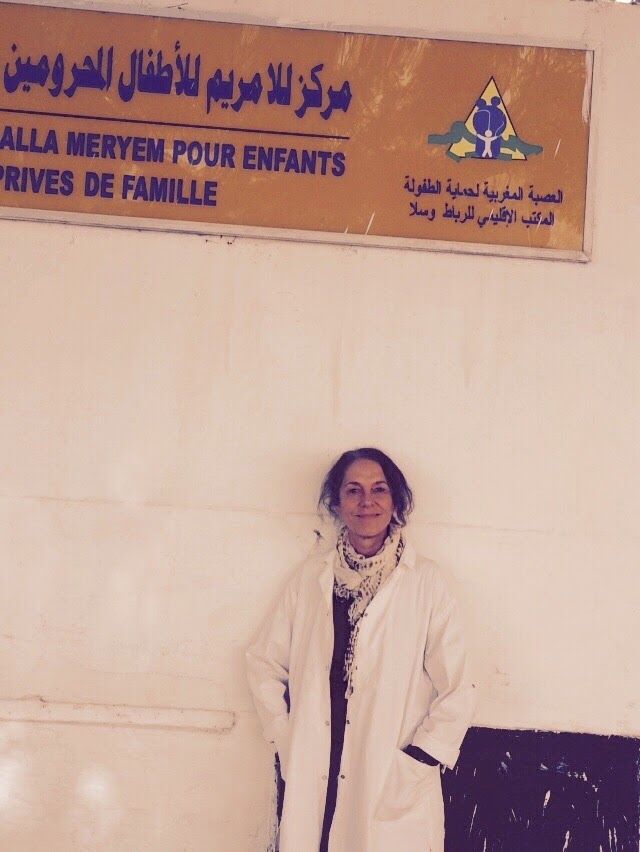