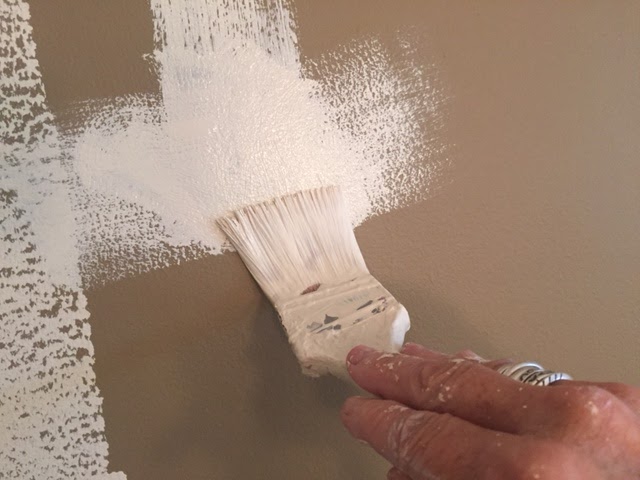 Three days ago, I decided to paint my family room.  I’m still painting.  My paint brush has brushed itself right out of my family room, down the hallway, into the living room and is now debating on whether it should continue its journey with a stop off in the dining room and the kitchen.  I have found the perfect shade of white, which was no easy feat, as there are endless choices for what I used to believe to be a “non-color.”   I can’t seem to get enough of the magic it is leaving behind in its wake.  It feels like I’m painting on a layer of light and bright with each stroke of my brush.  My rooms are coming alive with each brush stroke and I am as well.

My three day immersion into this continually growing project has become far more than changing the colors of my walls.  As my paint brush cuts in every door frame, baseboard,  electrical outlet and window frame, I can’t help but wonder about all the times this exact same process had been done before me in this house.  My house was built in the 1941, so I’m guessing quite a few times.  It was my antiquated electrical outlets in my living room, which accept only a two pronged plug and that I continually have on my “need to update” list, that brought that thought to my attention.

How many people have returned to these rooms in their memories?  The very same rooms that I’m now painting?   How many families have written down this address as their own and given the same directions that I have to people on how to find it?    The walls hold such a rich history of people and experiences that I couldn’t help but start to wonder about the specifics.  What joys were experienced in these rooms?  What heartbreaks?  What celebrations?  Did toddlers take their first steps here?  Did teenagers storm out the front door here in anger because of a disagreement with their parents?  Was there a Dad who sat up late in the front room that recently went from sage to white, worried and waiting for his daughter who ignored curfews?  What did his bathrobe look like?  On a side note, if anyone who lived or is living in the house I grew up in has ever wondered such a thing, I can tell them yes, often, and it was red plaid.  How many new babies were brought through this front door to ever expanding families?  How many kids have climbed out the upstairs bedroom window, as my son did several times, to sit on the roof and look at the stars?   Even though I’m in my 7th year of living here,  for the first time I’m feeling a sense of belonging and pride at being the newest member to a long string of people who were once owners that started forming in 1941.  It’s a club I joined whose members I will likely never meet, but oddly, think of often.

I have to wonder about the original owners of my house and how excited they must have been to be living in this brand new subdivision called “Leawood.” Did they get to help decide where to plant the 3 oak trees that are now massive and if so, did they wonder what they’d look like in 75 years?  And who would be enjoying their shade along with the tremendous job of leaf removal?  Who, in the long line up of families before me, decided to install a bomb shelter in the basement?  Were they afraid?  Did it make them feel safe?  Did they go to the basement to sit in their new investment just to see what it felt like while secretly trying to get their money’s worth on a fear based investment?  Did they invite their neighbors over?  Or did their neighbors have their own bomb shelter to enjoy?  When I was showing my son the house shortly after buying it, he saw the bomb shelter in the basement and was excited that I bought a house with a “sauna.”   Well, not exactly, son.   It now houses my art portfolio, several large canvases and a smattering of miscellaneous items that I don’t know where else to put and yes,  it is kind of creepy,  but it’s also become a bit of an attraction for anyone who goes down to my basement.  I’ve seen more than one workman anxiously show off the space to another workman, as if he discovered it.

There are switches that turn on nothing, outlets that predate the 2 prong models with 4 tiny holes that have been painted over so many times that they’re almost camouflaged into the wall, an exterior light fixture with no switch and a light switch that I found in the back of an upstairs closet that turns on huge vapor light in the back yard that could light up the whole neighborhood if it was switched on.  Frustrating as they are, I’ve left the quirks alone as its easier than trying to fix them.  Besides,  they add a lot to the charm of the house.

I feel a strong sense of responsibility as the keeper of this little piece of history that I call home.    The family who lived here before me called it their home for 35 years and raised their family of 6 here, which I think about every Christmas when I have an extra 4 or 5 staying here and it feels like we are busting at the seams.  I don’t know anything about the family, short of what my neighbors have said in passing, but do know that they loved the house as they sent me a letter telling me so shortly after I moved in.  They wished me the same joy from the house that they had had for the past 35 years.  I know they are still in the area and often wonder if they slow down when they drive by and what memories come to mind for them if they do.  I love that they cared enough about the house they were leaving to share that with me and think they’d be happy with the way I’ve cared for it.

Shortly after I moved in, I found a set of blueprints in an upstairs bedroom closet.  It was for the “new” addition of a family room.  Although it blends nicely with the original home, it does feel a bit “newer” with higher ceilings, different flooring,  the addition of a few sky lights and updated electrical outlets.  According to the blueprints, that “new” addition, which is what I started calling it after I moved in,  was added in the early 1970’s.  I was still living in my childhood home in Olathe, KS, sharing a room with one of my sisters and making my twin bed every morning when the “new” addition in my house was added.  I suppose it may be time to drop the “new.”  That got me wondering about the house I grew up in and who is sleeping in that old room of mine now?  Do they ever wonder about who came before them?  Do they share the room with their sister?  Did they ever want a room of their own so badly that they moved their mattress into the small closet and called it home for almost 2 days?  Did they ever climb out the bedroom window when they were grounded to make their escape on a Saturday night?  I would tell them if they asked that yes, perhaps that did happen once.  Twice at the most.

This has been an easy house for me to feel a part of and although I didn’t raise my family here, nor did I have any kind of history with this house before I purchased it, I can easily see my kids in the breakfast nook eating their cereal before school.   The energy of these walls have embraced me from day one, making me feel so comfortable and familiar that I have to remind myself that it was someone else’s childhood home and story.  Not mine.

I must admit that hours and hours spent crouched on the floor with a dripping paint brush in one hand and a container of paint in the other,  has put my mind into a full imaginative cycle that is now starting to put faces and expressions and clothing on the people I imagine wandering through my home 75 years ago.  My son suggested the idea of leaving photos behind when you move from a place for the new owners.  Oh how I wish that had happened here.  Maybe it was too many Nancy Drew mystery novels read as a child or an overly active imagination, but I want to find that proverbial  trunk filled with clothes and photos and trinkets from the past.  I thought it was going to happen when after purchasing the house, I discovered in the garage a set of wooden pull down steps that led to the attic.  Again, too many Nancy Drew mysteries, but I truly thought I had found my treasure.  Sadly, there was no history-filled trunk, but there were some old windows, stacks of wood and other building materials and decades of dust.  I have since added my own collection of things to the pile of items I no longer need but am not quite ready to get rid of.

Through this slow, tedious, yet mindful process of transformation one brush stroke at a time, I feel like I’m giving something back to this little house that has given so much to me.  It’s feels like a hug to a large group of people that I have never met and most likely never will, but whose presence is with me every day and who I’m guessing would also want the best for a home they once called their own.

Since I started writing this, I’ve added 2 more days and 2 more rooms to this process.  I’ve also gone deeper into my imagination about the people and their life experiences that this house holds in its walls, but after several days of my immersion into history with a loaded paintbrush, I’m calling it done.  There’s a very thin line between thorough and obsessive and I’m starting to teeter a bit.  Oh, and I’m running out of walls.  The process of adding a new shade of light and clean and airy to my walls has has given me a new feeling of familiar with my with this place I call home– like we’ve known each other for a very long time.