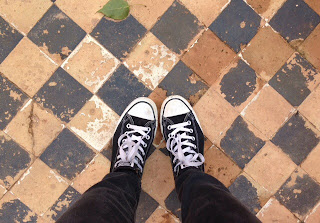 I’m going with a stock photo since cameras aren’t allowed in the orphanage….

Salema.  Her name is Salema….the little girl who has captured my heart in the orphanage. Today she was in a pink Hello Kitty sweatshirt and almost matching pink pants.  I think it suited her better than the Rock the Band shirt.  I couldn’t help but glance at the size as I was trying to reposition her in her crib, and it was a 4 toddler.  The pants had been pinned to keep them on.  I’m guessing she is 11 or 12 years old and her legs are so thin that when I took one of them in my thumb and index finger, there was at least an inch of overlap on my fingers.  She was happy today, and I reminded her more than once that she had the best seat in the house as her bed is right under a large window and when I pulled the colorful striped curtain back, she was able to feel the sunshine on her face, along with a gentle breeze, as one of the window panes was missing from the window.  The pleasures are tiny….a breeze on her face on a picture perfect day and a soft stuffed dog nestled next to her.  She was happy.  Very happy.  She would grab my lab coat every time I started to leave her so I know she was aware of my presence and that felt good.  I noticed that both of her palms had a brown stain on them, the same stain I had noticed last week.  It looked a bit like iodine.  I assumed it was a marking to indicate a health issue to the nurses or aides, but when I asked Mohamed, he said no, it was the remainder of a henna marking that all the girls were given a few weeks ago for a religious holiday. I was touched to hear that the girls in the orphanage had henna painted on their palms simply for beautification purposes.  Dignity.  Respect.  Love.

I’m starting to get used to the wails, the screams, the wheezing and the raspy crying, or maybe less shocked is a more appropriate description.  I do find that a brief respite with the babies one floor up, is a good recharge for my emotional batteries.  Most of the babies have their name and birthdate above their crib, but the handful with only names and no dates are the babies that were found,
so there is no accurate birthdate.  The babies are usually named by a social worker unless already named by the mother who gives them up.  They are so adorable, and mostly male as the ones that do get adopted out, are usually the girls as they are viewed as being easier to raise.  Mothers are also more likely to give a son away than a daughter as there is a fear that once the son gets older and learns of the circumstances of his birth (i.e. unwed mother), he might retaliate against her.  They are all so hungry for the tiniest bit of attention and touch and it takes so very little to get them to go from crying to smiles and giggles.  I was playing “this little piggy” with one of the baby’s toes, when I realized the irony of the song given that pigs are,a rarity around here as Muslims do not eat pork because it is considered an unclean meat.  No pigs.  And sadly,  no bacon.

I will be back at the orphanage tomorrow as the women’s center is closed on Fridays.  Today there were meetings at the school, which is why I ended up at the orphanage.  The combination gives me a nice cultural, intellectual and emotional mix.

The traffic was crazy this morning as the King’s brother is getting married today (a celebration that lasts several days) and there are many dignitaries in town.  I find it all very exciting… Mohamed, not so much.  He said he doesn’t know that much about it, but if I want to know more, I should ask a girl….